Is the new BMW X4 coupe-SUV a better bet than the X3 it’s based on? We drive it in M Sport guise to find out... 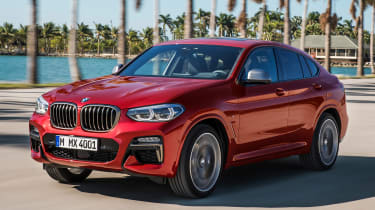 In isolation, the all-new BMW X4 is a very good car. It offers what is arguably the best compromise between ride and handling of any mid-size SUV on sale – and it’s got one of the finest interiors and infotainment systems in the business. The trouble is, those things also apply to the existing X3; a car that is more spacious, less contrived to look at and much better value for money. Unless you really want to be different, it’s tricky to recommend this new X4 over BMW’s already brilliant X3 SUV.

The new BMW X4 is an odd-looking thing. It’s not the first model to fuse coupé and SUV shapes – even the first-generation car was preceded by the bigger X6 – but for some, it’s a niche that’s tough to come to terms with.

The combination of a bluff front end and huge grilles with a sleek, receding roofline gives the impression its face is too big for its body. Styling is a subjective thing, of course, but could this new car ever be described as pretty?

To many, that won’t be a problem. The X4’s appeal will come from the fact that the ‘sport’ part of Sports Utility Vehicle (SUV) is more influential than it is for the car on which it’s based: the X3. Thanks to firmer suspension and a wider rear track, BMW reckons the X4 will out-handle the class-leading Porsche Macan. 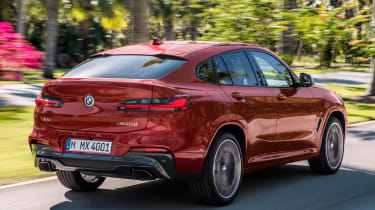 There are two engines to choose from at launch in the UK. Both are diesels and get BMW’s xDrive all-wheel-drive system. The entry-level xDrive20d has a 187bhp 2.0-litre four-cylinder engine, while the M40d uses a 3.0-litre straight-six that produces 355bhp and 500Nm of torque.  Both 30d and M40i models (already available in the X3) will arrive later; until then, officially the X3 is the faster car.

The M40d is a standalone model. It has 20-inch forged wheels, uprated brakes and fully digital instruments. Regardless of spec, the cabin is a lovely place to be. The dash design is lifted from the excellently appointed X3. It’s beautifully put together, easy to figure out, and, when equipped with the larger 10.25-inch touchscreen (M Sport trim and above), has arguably the best infotainment system in the business. It’s so good that the lack of Android Auto is only a mild inconvenience.

The sloping roofline does compromise interior space. Six-footers sat in the back will be brushing their heads against the rooflining, although legroom is still plentiful even for the tallest adults. The 520-litre boot is smaller than the X3’s and the opening is tighter and higher.

But all is forgiven out on the road. The suspension changes take the X3’s already strong starting point and add an extra dimension of body control. Only when you hit a severe mid-corner bump while really pressing on does it seem anything other than completely unflappable. It’s remarkable for a high-riding SUV.

Adaptive dampers are a £460 option, and they’re worth ordering for the extra smoothness they bring in Comfort mode. That said, the ride quality never comes close to feeling harsh. 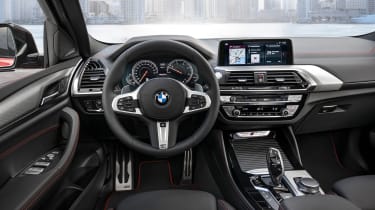 It’s the 2.0-litre diesel unit that will undoubtedly prove the biggest seller. In the X3 it performs strongly when matched to a brilliant eight-speed automatic transmission.

The engine itself isn’t as refined as the equivalent Audi diesel, but there’s not much in it. At a cruise, the most audible sound is from the big wheels and low-profile tyres, with a little wind whistle making its presence felt around the door mirrors, too.

It all helps to put the X4 in very good stead against its rivals. Prices start from £42,900 for the xDrive20d, which is a little less than the Mercedes GLC 250 d Coupé. Although M Sport and M Sport X models are more expensive than the Mercedes, the BMW is faster and much better to drive, without feeling significantly stiffer. Alfa Romeo’s Stelvio runs it close in terms of fun, although it can’t compete for interior quality.

The main concern for the X4 comes from within BMW’s own stable. The xDrive20d M Sport is £2,980 more expensive than the equivalent X3, which is a lot of money for a car that isn’t as practical and, crucially, is predicted to hold around five per cent less of its list price over three years.