BMW was probably as surprised as the rest of us when its X6 was a smash hit, so it made sense to make the formula more accessible by downsizing it. On the face of it, the X4 isn’t a very rational purchase because it costs more than an X3, yet isn’t as practical. But that hasn’t stopped the X4 from finding buyers, and it’s easy to recommend as long as ultimate load capacity isn’t needed. As well as strong, efficient engines, you get a family-friendly SUV offering year-round security, great towing abilities, a luxury cabin and superb safety – albeit at a price.

With a history that stretches back to 1916, its hardly surprising BMW’s back catalogue is rich with luxury saloons, sports (and sporting) cars and even microcars, the latter with its characterful Isetta bubble car that was produced between 1955 and 1964.

But it wasn’t until 1999 that the brand introduced its first SUV, the X5, although its first-ever car with four-wheel drive was the 1985 325iX, which didn’t make it to the UK.

The X5 proved an SUV doesn’t have to be cumbersome to drive, and since then BMW has launched one dynamically adept 4x4 after another, covering the small, mid and full-size classes. Having conquered those sectors the firm then created new ones, first with the X6 coupé-SUV in 2008, then the X4. 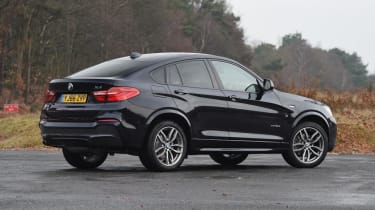 This first-generation X4 wasn’t offered in the UK with petrol engines, and while the 2.0-litre four-cylinder diesel came with a choice of six-speed manual or eight-speed automatic gearboxes, the 3.0-litre six-cylinder units came only in auto form. In line with BMW’s other models, buyers could choose between SE, xLine and M Sport trim levels.

The auto box is superb and officially more frugal than the manual, so there’s no reason to avoid it; three-pedal X4s are consequently very unusual. The 2.0-litre engine provides all of the performance you’re likely to need, with decent economy, too, but the six-cylinder engine is sublime and turns the car into a great long-distance cruiser, without a ridiculous penalty to running costs. 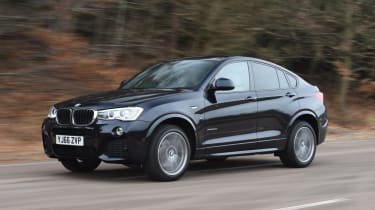 Alternatives to the BMW X4

The only direct X4 rival is the Mercedes GLC Coupé, which also offers luxury and performance, along with decent build quality. Like the BMW, the GLC isn’t cheap to buy or run, but it’s a very desirable car. If you like the idea of the X4 but need more usability, then the BMW X3 is the obvious alternative. It offers everything that the X4 does in terms of engines, transmission and kit, but with extra carrying capacity and a lower price.

A more left-field option is the Infiniti QX50, which is another well equipped, sporty SUV with a plush interior, but there aren’t many to choose from. Other alternatives include the Audi Q5, Porsche Macan, Volvo XC60 and Range Rover Evoque, which are less distinctive but more practical.

Low-profile tyres mean the X4’s alloys can be kerbed easily. Diamond-cut rims also have a tendency to show signs of corrosion.

Despite the X4’s hatchback configuration, there’s no wiper on the rear window, but this doesn’t seem to cause any problems.

If an X4 has the head-up display (HUD), check how sharp and clear it is; some owners have reported noticing that it can be a little blurred.

All in the name

The first-generation X4 was codenamed F26 by BMW, whereas its successor (built from 2018 onwards) is known as the G02.

After the eye-catching exterior, the cabin design is underwhelming, but it’s well made, easy to use and nav is standard across the range. There are premium materials everywhere, comfy and supportive seats front and rear, yet headroom in the back is compromised and so is rear three-quarter visibility. Boot space trails the X3, but at 500/1,400 litres (seats up/down), it’s still usable. 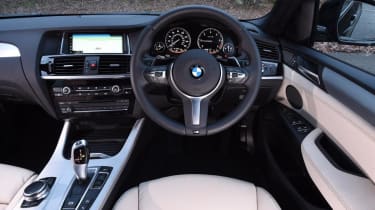 The X4’s variable servicing allows up to two years or 18,000 miles between maintenance. Checks alternate between minor (£277.33) and major (£492.01). The minor is little more than an oil change, but the major replaces the pollen, air and fuel filters.

A three-year-old X4 is eligible for cut-price servicing at any official dealer, dropping the price of a minor check to £203.77 and a major to £386.23. The brake fluid needs changing after three years, then every two years, at £60.40. There’s no set schedule to replace the coolant, while there are no cambelts to renew.

The X4 has been recalled five times. The first was in June 2016 because the Isofix mountings could work loose or detach. A fuel delivery system fault prompted a second action in April 2018. The third in August 2018 was because of faulty pistons in the rear brake calipers. The risk of fire due to a leaking exhaust gas recirculation cooler led to recalls in November and December 2018.

The X4 hasn’t featured in our Driver Power surveys but the X3 Mk2 has, and this gives a pretty good indication of what owners can expect from the X4. The X3 featured in the 2018 used car poll, coming 46th out of 100. There were mid-table finishes in most sections, with a low score of 87th for running costs. The highest marks were for the engine, gearbox and interior.