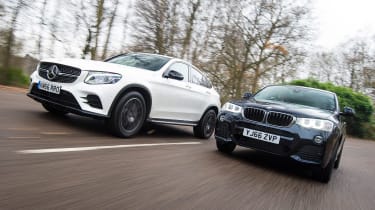 Mercedes has played catch-up to BMW in the world of large, swoopy SUVs, as its GLE Coupe was released seven years after the first X6.

However, the brand has learned from its mistakes, and is wasting no time capitalising on the trend for compact curvy off-roaders with its GLC Coupe. Based on the C-Class, the newcomer is, as its name suggests, a mid-size 4x4 with more svelte, coupe-like styling.

There’s no doubt the recipe has what it takes to win sales, but if Mercedes wants to get its own back on its rival, it must beat the X4. BMW has condensed what’s made the X6 a success into a smaller body with similar styling cues. Which high-riding coupe-SUV is king? 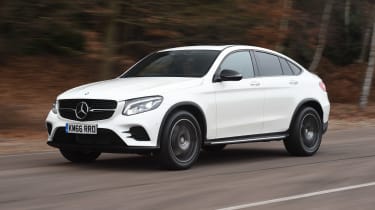 On the face of things, it looks strange that the less practical and efficient Mercedes GLC Coupe commands a £2,930 price premium over the equivalent GLC, but once you realise this literally is the price you pay for style, it’s easier to comprehend what the GLC 220 d AMG Line stands for.

Style-conscious buyers wanting a diesel SUV with the lines of a coupe have now got it better than ever. And if you don’t want to break the bank with the larger, more expensive GLE Coupe or BMW X6, the GLC Coupe is a more affordable alternative.

At £42,540 it’s still not cheap, though – so what do you get for your money? This price buys you an AMG Line model with the entry-level 168bhp 220 d engine. Despite a modest power output and a rather average 400Nm of torque, the nine-speed transmission helps boost acceleration and, along with four-wheel drive, gets the bulky 1,845kg GLC off the line fairly effectively. 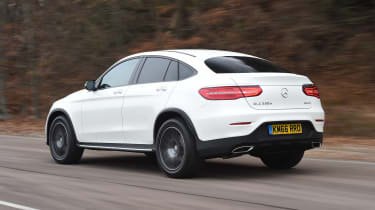 At the track the car accelerated from 0-60mph in 8.2 seconds, but revving the engine hard releases a cacophony from under the bonnet. Refinement is not the 2.1-litre unit’s strong point, so it’s better to tread gently on the throttle and stroke the GLC Coupe along at a more relaxed pace. When you do, the in-gear performance is effective. And with one extra ratio compared with the eight-speed BMW, it pulls a mere 1,500rpm at 70mph in ninth, which keeps the noise down on the motorway.

However, this is where the positives end. On our test car’s 19-inch wheels the GLC Coupe’s ride was lumpy, while the body didn’t feel particularly well tied down over bad surfaces.

On these rougher roads the chassis fidgets, and it struggles to settle into a smooth lope on the motorway. Yet start to push harder through a series of corners and the Mercedes wallows around. The mushy, lifeless steering lacks the BMW’s precision, and the GLC Coupe isn’t as willing to change direction. Nor is it as agile or fun – although neither car is particularly inspiring from behind the wheel. 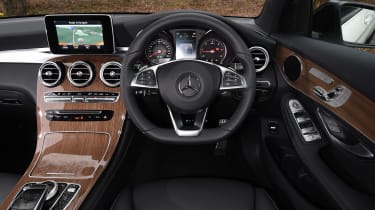 Being based on the regular C-Class, the cabin is smart, with a pleasant mix of upmarket materials. Artificial Artico leather is fitted as standard, however; BMW includes real part-leather sports seats in the X4’s price.

And just as the GLC Coupe’s dynamics are compromised, the interior is tempered by a dated multimedia system, with low-res graphics. At least there’s lots of standard kit: LED headlights, keyless go, sat-nav, DAB, park assist, heated seats and a reversing camera all feature, alongside some strong safety tech that you’d expect at this price. 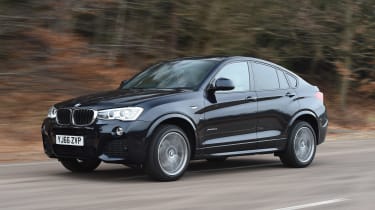 When the BMW X6 was first launched, it’s fair to say it split opinion – and in the translation to the smaller X4, the divisive looks have remained. Yet while it’s not as well resolved as the GLC Coupe, as with that car the design will be part of the appeal for many buyers, even if the X4 looks a little ungainly.

It’s hard to argue with what underpins the styling, however. BMW’s trusty 187bhp 2.0-litre turbodiesel and eight-speed automatic gearbox send power to all four wheels. But despite the power advantage over the Mercedes and an identical 400Nm of torque, the X4 was actually slightly slower from 0-60mph, taking 8.3 seconds. 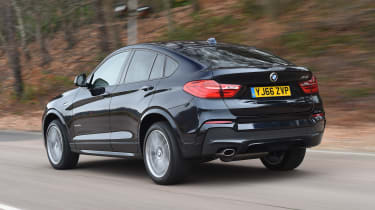 The gap is only marginal, but as the BMW has one fewer ratio to choose from, its in-gear performance in top couldn’t match that of the Mercedes in eighth. However, over our other speed tests in the remaining ratios, the X4’s performance pegged the GLC’s; it took an identical 3.2 seconds from 30-50mph in third, while its 8.9-second time from 50-70mph in seventh was also the same.

Apart from the 0-60mph sprint, then, there’s little to split the two SUVs in a straight line, although when you reach a series of corners the X4’s sharper chassis shows. The steering is still devoid of feel, but it’s much more accurate, while the body rolls less.

You lose some ride comfort as a result, and the BMW struggles to smooth out rough road surfaces riding on this M Sport’s standard sports suspension and 19-inch wheels. At least the firmer damping gives the X4 more control when you want to drive it faster.

The BMW’s cabin is more staid than the Mercedes’, with two horizontal lines for the climate controls and some audio buttons sitting underneath the square infotainment system. But the set-up’s graphics are of a higher resolution. 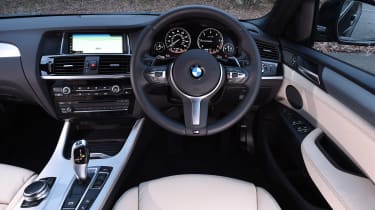 Due to its shape, though, the car suffers from the same problems as the Mercedes. These are mainly that its tapering roofline reduces headroom in the rear – albeit not to quite the same extent as in the GLC Coupe – as well as restricting boot space compared with the X3’s.

Material quality is a match for the Mercedes’, however, with soft-touch plastics lining the dashboard and tactile leather on the doors. The standard iDrive infotainment system is more intuitive to use than the GLC’s Garmin-based unit, but as in the Mercedes, we’d recommend going for an upgraded media package; BMW’s Professional set-up is a £900 optional extra. 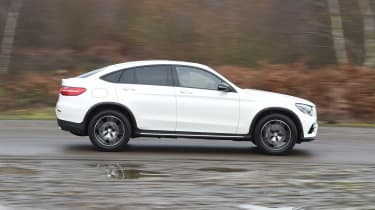 As it’s cheaper to buy and run than the BMW but offers similar practicality and sleeker looks, the GLC Coupe shades it. The car will appeal to those wanting more style from their SUV, but you’d really have to like the looks to pay the extra over a regular GLC, which rides better, costs less and has a bigger boot. 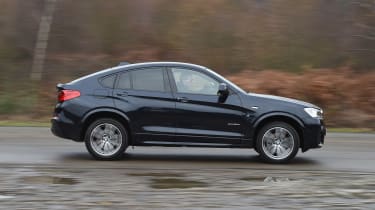 The BMW narrowly loses out to the Mercedes, because it’s pricier to buy and run. Cost won’t matter to many drivers here, of course, with style key to people looking for an alternative SUV. Again, you’d be better off saving money and opting for the regular X3, which is more practical and has a similarly high-quality feel.