Is the new 503bhp BMW X3 M Competition a serious rival for the Alfa Romeo Stelvio Quadrifoglio and Mercedes-AMG GLC 63? We find out... 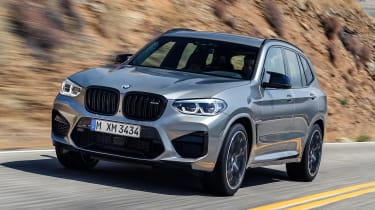 If the SUV is ever to be fully accepted into the performance car fraternity, then BMW certainly needs to make the case for it. This new X3 M Competition is what you’d expect, given its target audience, blending a user-friendly all-wheel-drive system with steering and suspension that do well to disguise the heft. The new engine is likeable too, but for this money it’s impossible to ignore the pull of the epic V8-engined Mercedes-AMG GLC 63 S. The X3 M is fast, but maybe lacking a little flair.

The BMW X3 M has been a question of when, not if, for several years now. With more and more buyers turning away from traditional performance-oriented segments, this is very much an M car of the times.

Purists may scoff at that, but perhaps that’s why it’s taken BMW so long to provide us with a rival for the Mercedes-AMG GLC 63. It could also be why this newcomer, in one key way, serves up an early preview of the M division’s next big thing to get the crowds interested.

Under the suitably angular and sporty metal is a new engine – essentially a totally redeveloped version of BMW’s 3.0-litre turbocharged straight-six that’ll make its way into the new M3 sometime next year. 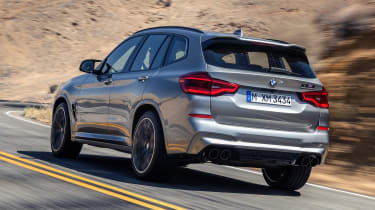 In Competition spec (the regular, 474bhp car isn’t coming to Britain), the X3 M serves up 503bhp and 600Nm of torque sent to an xDrive four-wheel drive set-up, which BMW’s engineers have injected with as much rear-biased DNA as possible.

That power figure gives the X3 M Competition the same output as the Alfa Romeo Stelvio Quadrifoglio and the V8-engined Mercedes-AMG GLC 63 S. Yet the lack of bark is no dent in the BMW’s character; the new engine is the most powerful straight-six ever concocted for an M car, enabling 0-62mph in just 4.1 seconds.

But it’s the way it delivers that performance that makes this engine a real alternative to the thunderous Merc. For a turbocharged unit, it exhibits some naturally aspirated traits. It’s fairly linear in its delivery, and with the active exhaust valves open it’s a joy to string out right up to a heady 7,200rpm redline. At the opposite end of the rev band it’s deep, purposeful and prone to spitting and crackling, too. It has loads more character than the slightly droning, mid-range surge of the 3.0-litre in the outgoing M3, and it feels more flexible. 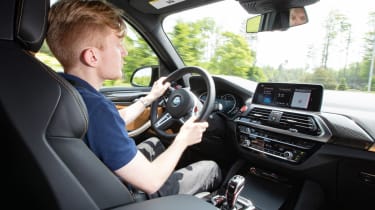 Unsurprisingly, given the huge power and torque on offer, a prolonged squeeze of the throttle hauls the X3 M closer to its 155mph limited top speed with relentless ferocity. It could go much, much faster than this; BMW will up the cap to 174mph on request.

For all there is to like about the new straight-six, many will still find the Merc’s V8 more exciting and more suitable in these heaviest of performance cars. The more guttural Stelvio outpaces the newcomer on paper, too. It bodes well for the next M3, however, demonstrating a breadth to its abilities that should make the new supersaloon a very talented car. With the exhaust closed it’s unobtrusive, and the eight-speed transmission works well.

The gearbox is configurable; you can leave it in auto, or utilise the Drivelogic system first found in the M5. This allows the driver to alter the characteristics of the shifts in both manual and automatic mode, with three levels to choose from.

It presents a minor problem for the X3 M’s otherwise impressive drivetrain. Left in its least aggressive setting it’s just too lazy for the motor it’s attached to. Ramp it up and you finally get the crisp, swift shifts you’d expect, but you’ll have to jump on the paddles to stop it from holding on to for too long.

The X3 M Competition tips the scales at 1,970kg, but while that’s something you’ll be aware of when driving, it’s controllable. The steering is like any other contemporary M-badged BMW – it’s accurate, sensitive and sensible, but lacks the ultimate heft of old M cars. 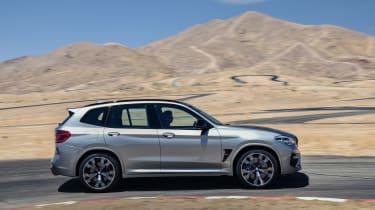 What tames the X3 M Competition and gives you confidence to press on is the xDrive set-up. BMW claims that the all-wheel drive system features a rear bias, and while there’s definitely truth in that, if you ease the traction settings back and begin to explore the car’s edges, the safety net is obvious. This means you can pin the throttle pretty early out of corners, more so than in the slightly more playful Alfa. The M1 and M2 settings on the wheel can be configured to your desires, but the defaults bundled by BMW feel like rounded set-ups few will tinker with.

There’s no escaping that at low speeds the X3 M Competition is rock hard. It features adjustable, electronically controlled dampers. But the set-up, even in its slackest setting, feels like it has been engineered to smother jolts and imperfections at pace. Faster roads unearth a more pliant side, which makes the X3 a good car to hustle cross country on faster roads and motorways. Everywhere else, you’ll feel its firm edge bite. A cliche, but a very black and white case of it.

Inside, there’s a load of M-badged trinkets, alongside electronically adjustable sports seats. There’s no doubting the quality of the interior, easily outflanking the Alfa Stelvio QV and better integrated than the mix of old and new found in the facelifted GLC. Only the Porsche Macan can pip this for a driver-oriented, well-trimmed interior.