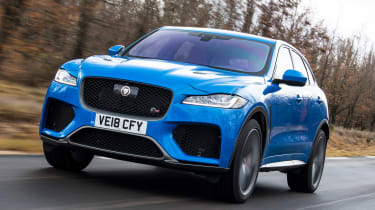 The Jaguar F-Pace SVR had a longer gestation period than most, having been delayed by a year or so before arriving on sale in the UK in mid 2019 3 years after the launch of the standard F-Pace. A high performance SUV designed to take on the Alfa Romeo Stelvio Quadrifoglio, BMW X3 M Competition and Mercedes-AMG GLC 63, the SVR takes Jaguar’s mid-sized premium SUV and adds an uprated chassis and the same 542bhp 5.0-litre V8 engine as found in the Jaguar F-Type SVR sports car.

The monstrous engine is mated to Jaguar’s SportShift eight-speed automatic gearbox and a four-wheel drive system that feels very rearwardly biased when the sportiest of the car’s selectable driving modes is engaged. 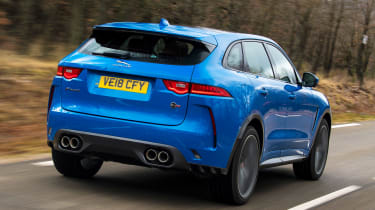 The resultant performance SUV is one with lots of power and a surprisingly playful character, but that never loses sight of its requisite Jaguar-ness – there’s a level of comfort that makes the F-Pace SVR a very user-friendly proposition for everyday driving provided you can afford the hefty running costs.

We’re big fans of the Jaguar F-Pace SVR – it’s a high-performance SUV with an intoxicating hot-rod character. Rivals like the Alfa Romeo Stelvio Quadrifoglio and BMW X3 M Competition are sharper to drive, but the SVR manages to offer a sporty edge without compromising on the comfort that Jaguar customers prefer.

It’s not the fastest car in its class nor the best to drive, but we think buyers will fall for the Jag’s combination of a raucous engine, comfortable ride, easy-to-drive nature and aggressive styling. Those looking for the last word in sports-car-like performance from an SUV will be better served by the Alfa but the Jag offers a bit more luxury and refinement.

The F-Pace has been turned into a great all-round real-world performance machine by JLR’s Special Vehicle Operations department. It lacks the sharper edge of the Alfa Romeo Stelvio Quadrifoglio and can’t quite match the Mercedes-AMG GLC 63 for outright muscle, but the Jaguar F-Pace SVR offers a compelling middle-ground between sportiness and luxury.

Regardless of which of the SVR’s driving modes is selected, the ride remains pliant and supple – it feels more comfortable in a wider range of conditions than some of its more focused rivals.

Handling is good too; the SVR feels markedly sharper than the standard car. There’s still a bit of body roll and the F-Pace feels a little bigger than the obvious alternatives when hustled down a B-road as a result, but it’s still easy to drive quickly.

With 542bhp and 680Nm of torque, the supercharged 5.0-litre V8 takes centre stage. It fires the F-Pace out of corners with addictive explosiveness while the slick-acting gearbox makes short work of changes. The car sounds great too – a thunderous roar accompanied by distinct supercharger whine when you squeeze the throttle hard. 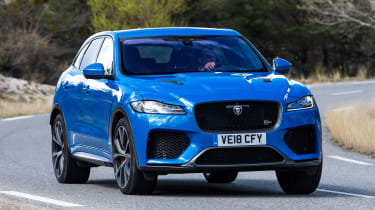 There’s more than enough performance on offer from the supercharged 5.0-litre V8 to move the rather heavy F-Pace down the road at an alarming rate – 0-62mph takes just 4.3 seconds, and top speed is a more-than-adequate 176mph. Some rivals are faster – the Mercedes-AMG GLC 63 gets to 62mph three tenths quicker, while the BMW X3 M Competition manages a 4.1-second sprint and boasts a 177mph top speed. These are small differences in the real world, though: the F-Pace is still a hugely fast and entertaining SUV.

The F-Pace SVR is a heavy SUV with a supercharged V8 engine; running costs are high

While most potential customers of a performance SUV won’t care about running costs, it’s important to note that the Jaguar F-Pace SVR is one of the thirstier options on the market. Official fuel economy sits at 22.6mpg on average – relatively poor for this segment. By contrast, the BMW X3 M Competition returns 24.2mpg on the combined cycle and the Alfa Romeo Stelvio Quadrifoglio manages 24.5mpg.

CO2 emissions are high too: 272g/km in the Jaguar versus 222g/km in the Alfa Romeo and 239g/km in the BMW. Only the similarly V8-powered Mercedes-AMG GLC 63 produces more CO2, with 278g/km. First-year road tax will be equally hefty in all these cars – the maximum charge available – while the £145 payments thereafter will be topped up in years two to six by the extra £320-per-year surcharge for £40,000-plus cars.

Insurance will be pricey: the Jaguar F-Pace SVR sits in insurance group 48 out of 50. The GLC 63 sits just below in groups 46 and 47, while the Stelvio Quadrifoglio is in group 50.

Our experts are yet to assess the F-Pace SVR’s potential for depreciation, but the standard car is expected to hold onto around 48 to 49 per cent of its value after 36,000 miles and three years come trade-in time. The SVR model should achieve a similar result.

Sporty luxury is the order of the day inside and out; infotainment still trails the systems in rivals, though

Sitting at the top of the F-Pace range, the SVR gets a unique look and fully loaded interior to set it apart. Externally, the sportily designed F-Pace gets a steroid injection that includes 22-inch alloys, an SVR bodykit, quad exhaust pipes, functional bonnet vents and adaptive LED headlights. Inside there’s a luxurious combination of lozenge-quilted leather upholstery, sports seats, a sporty automatic gearlever and aluminium gearshift paddles.

The interior gets a lift over other F-Pace models but feels a little dated next to that of the Mercedes-AMG GLC 63 and newer BMW X3 M Competition. It’s still a comfortable and hushed place to sit, though – at least until the sports exhaust roars into life under hard throttle. 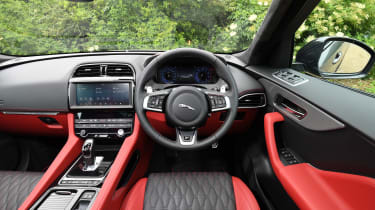 There’s lots of on-board tech in the SVR thanks to its range-topping status – ambient interior lighting, dual-zone climate control, heated and cooled front seats and a Meridian hi-fi system are all included.

Jaguar’s 10-inch Touch Pro infotainment system is included but is a weak point as in other models in the range. Jaguar has added Android Auto and Apple CarPlay connectivity – a glaring omission originally – but the system still can’t match those found in rivals from BMW, Mercedes and Porsche. We prefer it to the Stelvio Quadrifoglio’s infotainment, however.

The SVR treatment hasn’t robbed the F-Pace of any practicality; it’s a big performance SUV for the money

The Jaguar F-Pace is larger than some of the cars it goes up against – it’s a little longer than an Audi Q5 but has almost as much interior space as some rivals from the class above. There’s lots of room to get comfortable in the front and rear, while luggage space is impressive.

There’s ample head and legroom in both rows for adults and children alike; the F-Pace remains a very practical family SUV in terms of interior space. It’s best to avoid the optional fixed or sliding panoramic roof options if you need to maximise headroom for taller occupants, however. ISOfix points are supplied in the outer two rear seats.There’s much more space in the back of the Jaguar than you’ll find in its Alfa Romeo rival, but the BMW and Mercedes run it close. 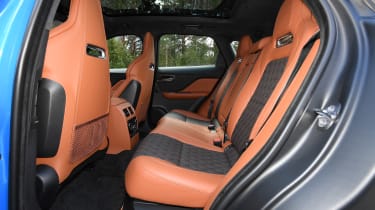 Boot space is the F-Pace SVR’s trump card – its 650 litres means there’s just as much space as you’ll find in the larger BMW X5, while 40/20/40 split rear seats can be folded to increase space to 1,740 litres. It’s the performance SUV to choose at this price point if space is a primary concern.

Reliability could be a concern but safety is first-rate

The Jaguar F-Pace finished in 40th place out of 100 cars featured in our Driver Power 2019 customer satisfaction survey. Those surveyed were all owners of the standard car but still rated ride and handling highly. Reliability could be an issue, however, with over 30 per cent of owners reporting experiencing a fault with their cars – a third these faults were down to electrics.

The standard F-Pace scored the maximum of five stars in Euro NCAP’s crash test in 2017. Like all F-Pace models, the SVR comes with autonomous emergency braking and emergency brake assist as standard; other safety kit includes a 360-degree parking camera, traffic sign recognition with adaptive speed limiter and a driver condition monitor. 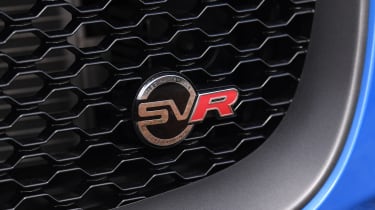 As with all Jaguars, the F-Pace SVR is covered by a three-year, unlimited mileage warranty. The Alfa Romeo Stelvio Quadrifoglio gets five years of coverage but is limited to 75,000 miles.

A number of fixed-price servicing plans are available for the Jaguar F-Pace SVR, but be prepared to pay for the privilege. Drive the SVR to its potential and you’ll happily munch through the (large) tyres and brakes at an alarming rate. 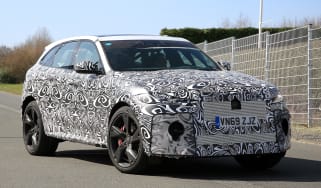 An updated version of the Jaguar F-Pace SVR has been caught on camera, undergoing testing on its German rivals’ home turf
Skip to HeaderSkip to Content