Can the new Mercedes B-Class inject some life into the dwindling MPV market? We hit the road to find out…

The all-new Mercedes B-Class betters its predecessor in every way, and yet its execution falls down the cracks between a regular family hatch and more traditional boxy MPVs. While it’s good enough to drive and has a beautifully tech-laden cabin, it lacks any true unique selling point. The BMW 2 Series Active Tourer’s innovative plug-in hybrid powertrain gives it the advantage.

While the rest of the motoring world shifts its resources from MPV to SUV, Mercedes continues to invest in a car for every occasion. Despite declining segment sales, the new Mercedes B-Class has been completely overhauled for 2019. Based on the same platform as the A-Class, the tech-laden newcomer aims to better its predecessor in every way.

So, six months after we first tried the A-Class hatchback, our attention turns to Merc’s five-seat MPV. Here, we’re testing the B 200 turbo petrol, which is expected to account for the lion’s share of sales when it goes on sale in the UK next month.

The all-new B-Class is longer and wider than before. Yet the biggest difference comes courtesy of the stretched wheelbase, which has been extended by 30mm. As such, there’s more space in the rear, with plenty of knee room even for taller adults. Launch cars come with fixed rear seats, which split 40:20:40, but a sliding bench is due in 2019 and should improve versatility. 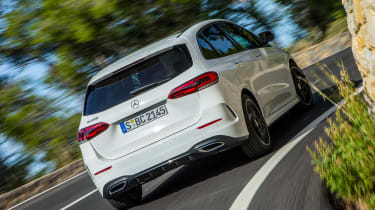 The 455-litre (1,540-litre with the seats down) load bay is on par with the old car, and pretty much matches the space on offer in a BMW 2 Series Active Tourer. That car is also available in seven-seat Gran Tourer guise, however, which not only adds two small chairs in the boot, but increases load capacity to a cavernous 1,820 litres.

The Mercedes doesn’t feel inundated with clever cubbies or innovative storage solutions, either, which is often a USP for small MPVs. The B-Class feels like a car better suited to those approaching retirement, than a young family with baby gear and buggies to carry.

On the road, Merc’s only MPV feels much like the A-Class on which it is based. In fact, after a few hours behind the wheel you could easily forget which car you were sitting in. The cabin is almost identical, with the same gloriously hi-tech infotainment set-up and ‘Hey Mercedes’ virtual assistant. It feels genuinely luxurious, in fact, in a way the BMW simply cannot match.

Mercedes will offer the B-Class with the same range of engines as the A-Class, albeit without the range-topping 250 petrol and AMG models. That means a choice of 180 and 200 petrol motors and 180, 200 and 220 diesels. While the basic diesel was the biggest seller previously, the market’s shift to petrol should swing this in favour of the punchy B 200, with it’s Renault-sourced 163bhp 1.3-litre turbo 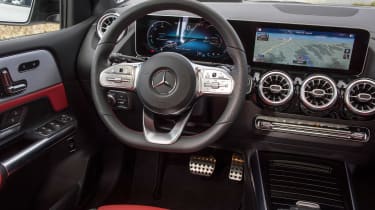 Go for this model and you’ll find the B-Class a sprightly performer. The seven-speed DCT box can feel a little hesitant at roundabouts or junctions, but on the whole it feels well suited to the car’s relaxed nature. The engine can be a little thrashy under heavy loads, but take things easy and it’s an excellent all-rounder. A manual is due in 2019.

Depending on which version you go for will determine how economical the B-Class is to run. The diesels are still the most frugal, but Mercedes says even the petrol versions should return more than 50mpg. A B 180 d will do almost 60mpg and emit 109g/km of CO2.

In AMG Line trim, you automatically get a multi-link rear axle, which works nicely to offer a decent mix of ride comfort and handling. Rarely does it crash over lumps or bumps – appearing nicely relaxed on motorways and longer runs, too. The steering is a little short on feel, but it’s consistently weighted and the grippy front end ensures the B-Class is a predictable car to drive. 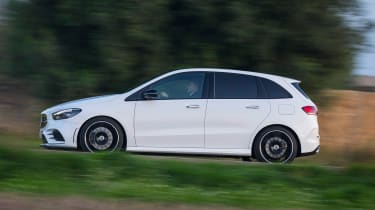 You sit higher than you do in the A-Class, giving a better view of the road ahead. It’s not as commanding as you might find in one of the B-Class’s SUV rivals, but the big glasshouse means all-round visibility is pretty good. But despite the loftier roofline, the car refuses to roll that much in the bends; body control is remarkably good for a car of this type, in fact.

Prices and specs haven’t been confirmed, but Mercedes tells us buyers will be offered a choice of familiar Sport and AMG Line trims. Prices for the B 180 Sport auto should start at around £27,000, with the MPV commanding a premium of around £1,000 over the equivalent A-Class hatch.

The brand’s latest MBUX infotainment system is standard, although our car’s larger screens will be a cost extra. If we use the A-Class’s trim structure as a guide, it looks like all models will feature LED lights, 17-inch alloys and ARTICO man-made leather trim. AMG Line cars are likely to get aluminium interior inserts, bigger wheels and all the usual sporty exterior trim.