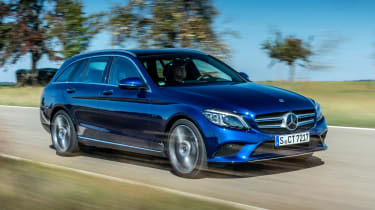 The Mercedes C 300 de makes compelling cases for both diesel power and electrification. It’s a refined long-distance cruiser that has enough EV range for many commutes. Given the potential benefits on tax and running costs, we think the Mercedes will be worthy of recommendation to more than a few.

Hybrids, whether they’re plug-in or so-called ‘self-charging’, tend to be based on petrol engines these days. But Mercedes believes buyers want a choice of electrified powertrain, so it’s offering its recently facelifted C-Class with both petrol and diesel hybrid options.

There’s the C 300 e on the way if you want petrol, but here we’re trying the diesel, which is badged C 300 de. It mixes the brand’s latest four-cylinder 2.0-litre diesel engine with an electric motor for a combined output of 302bhp and a not-inconsiderable 700Nm of torque.

That’s enough, Mercedes claims, for a 0-62mph time of 5.7 seconds, and a top speed of 155mph, although perhaps more significantly, the C 300 de can also travel at more than 80mph on electric power alone, and for up to 35 miles without using the combustion engine at all. This helps the car to achieve some pretty stellar efficiency figures, of course, with official CO2 emissions of between 38 and 42g/km. 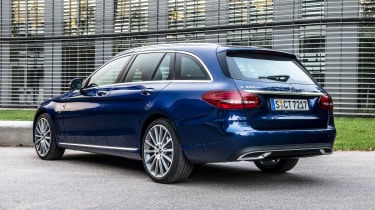 The C 300 de won’t go on sale until next summer, with first deliveries likely in November 2019, but we’ve already been told to expect a starting price of around £35,500 after the plug-in grant, with the estate version we’re trying here carrying a premium of around £1,000.

Gliding around town, the C 300 de seems perfectly at home in pure-electric mode. Once you’ve adapted to the slightly aggressive response pulling away from rest, you’ll find the set-up serene. There’s a small amount of motor and transmission whine, but not enough to disturb the C-Class’s cabin, and the trade-off between energy recuperation and braking is nicely judged.

Nail the throttle and the diesel motor seems to cut in at around 2,000rpm, at which point it’s definitely audible (there’s even the faintest of judders as it fires up) but far from intrusive. And when the engine is running for longer periods, it’s every bit as refined as it is in a conventional C-Class.

The C 300 de never feels quite as rapid as its raw performance figures suggest, mind you, a reminder that there’s a weighty powertrain aboard.

You’ll need to work with the car to get the best efficiency, too. It’ll offer advice on how hard you can push the throttle before the engine cuts in, and can even advise you to lift off (using screen prompts and haptic ‘taps’ through the throttle) on downhill stretches or if the car’s navigation data and cameras detect an imminent reduction in the speed limit.