We drive the new Mercedes 300 de to see if the diesel-electric hybrid works just as well as its petrol-electric sibling... 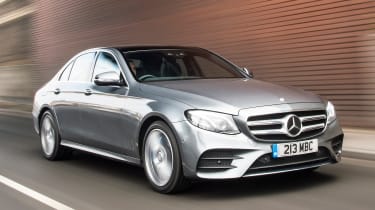 The E 300 de is a very worthy alternative to the petrol-electric E 300 e. It matches that car’s Benefit-in-kind company car tax rate, but while the petrol hybrid is a slightly better option around town, the E 300 de mixes similar pure-electric capacity with the long-distance cruising strengths of a diesel. We suspect it’ll be more economical in the real world as a result, bringing down running costs to really appealing levels.

Mercedes certainly isn’t holding back on electrification. The company’s pure-electric EQ sub-brand is only a few months away from launching its first model. And stalwarts in the regular line-up are getting more volts too; we recently tried the E 300 e petrol-electric hybrid in the UK, and now it’s time for us to sample its diesel sister, the E 300 de.

The mechanical make-up is a mixture of proven engines and new electric tech. The E 300 de’s combustion engine is the same 2.0-litre, four-cylinder unit that you’ll find in an E 220 d; it delivers 191bhp and 400Nm of torque. But alongside it, there’s an electric motor bringing an additional 121bhp and 440Nm.

Together, the two units combine to produce a system maximum output of 302bhp and 700Nm; the peak power outputs of the units are not delivered at the same time. 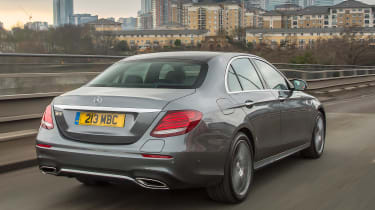 The car’s 13.5kWh battery has big enough reserves, Mercedes claims, for the E 300 de to travel up to 34 miles on electric power alone, and at decent speeds too. On one of the faster 7.4kW household points, a full recharge takes less than two hours. So it’s feasible that someone with a modest commute could plug their car in every night - or every other night - and not use a drop of fuel during the working week. Incidentally, you can have the E 300 de as an estate - but your electric-only range will take a slight hit, dropping to 32 miles.

These numbers - and official CO2 emissions of as little as 41g/km, even on the tougher WLTP cycle - make for attractive reading when they’re translated into a Benefit-in-kind tax rate of just 13 per cent. And while lots of petrol-electric hybrids fall short of their promise on the open road, the E 300 de keeps its word more effectively.

That’s mainly due to the diesel engine, which has enough low-down shove in its own right to cope with a car of the E-Class’s size. This means that, even with the extra weight of the batteries on board, you can cruise along using nothing but the diesel engine and happily return north of 50mpg.

While you’re doing this, you can use the E 300 de’s mode switch to maintain the level of charge in the batteries (or to replenish it, if so required). And then when you do get to the end of the motorway and enter a city centre, you can flick the switch to run on electricity alone.

It’s a shame, of course, that the car isn’t quite intelligent enough to work this out for itself. Hybrid mode still improves on the diesel-only economy, of course, and the transition between electrical assistance and combustion engine is managed with impressive smoothness – helped by the well-integrated nine-speed automatic transmission.

Frankly, you could leave it in this setting all day long and not be that aware that you’re driving a plug-in hybrid at all. Some of those who choose the E 300 de for its company car tax breaks may do exactly that - although they’ll be missing out on some potentially stellar running costs as a result. It’s a doddle to plug the E 300 de in, too, thanks to a neat charging socket integrated into the rear bumper. 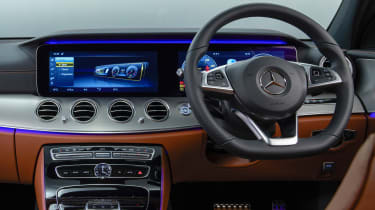 Hybrid buttons aside, there’s little in the cabin to set the E 300 de apart from its conventionally powered stablemates. But that still means you get a pleasing mix of premium finishes and materials, as well as one of the best infotainment systems in the business - and an extravagant widescreen display in the fascia.

There’s room on board for four grown-ups to travel long distances in comfort, too - and the E 300 de’s relaxed chassis settings should help with this. The car’s extra weight has resulted in a slightly firmer ride, but in the most part this remains a car gloriously focused on comfort, not handling agility. If you want a hybrid executive saloon to thread down a B-road, a (petrol-electric) BMW 530e will still be a better companion. But with only really sharp imperfections getting through to the E 300 de’s cabin, it seems very well suited to that mixture of urban EV running and diesel long-leggedness.

You do pay a penalty in boot capacity, of course; there’s a step in the floor that restricts the height of items that you’re able to slide ride into the load bay, and you lose more than 100 litres compared with a normal E-Class. But for most uses, even this compromised set-up should be fine, with enough space for a couple of decent-sized suitcases and an overnight bag.