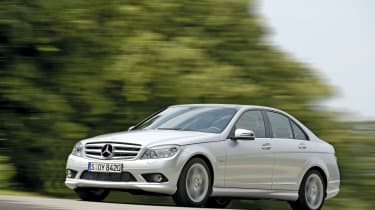 Ten years ago, 500Nm of torque and 138g/km of CO2 from a 2.2-litre diesel was unimaginable, but this car achieves it. The C250 CDI delivers a blend of hot hatch performance and supermini efficiency – and all in a package with the usual Mercedes quality.It’s just a shame it isn’t as refined as BMW’s 3-Series.

Eco-friendly drivers aren’t just green these days – they can be blue, too. Following Volkswagen’s Bluemotion range of frugal models, Mercedes has launched the BlueEFFICIENCY line-up with this C250 CDI.

It’s the first application of the firm’s new twin-turbocharged 2.2-litre four-cylinder diesel engine – and it promises to be clean and quick. It certainly looks good on paper. Power is up to 201bhp, with an astonishing 500Nm of torque – yet combined fuel economy is 54.3mpg, and CO2 emissions of 138g/km mean road tax costs only £120 a year. These are huge improvements over the C220 CDI it will replace.

As with VW’s Bluemotion and BMW’s EfficientDynamics technology, BlueEFFICIENCY doesn’t just incorporate engine tweaks. Changes include a totally flat undertray, slippery wing mirrors and low rolling resistance tyres, plus steering assistance only when needed. Bosses expect every model in the range to be equipped with the eco-modifications by 2011. Performance is as strong as the figures suggest. The huge reserves of torque mean that 0-60mph is dispatched in seven seconds – faster than a Golf GTI – and top speed is 155mph.

The engine is hugely flexible, pulling strongly from anywhere above 1,500rpm, but it feels rougher than a BMW 320d at both ends of the rev range. Lack of smoothness aside, the BlueEFFICIENCY kit makes little difference to the C-Class driving experience.

It is as solid on the road as ever, with no noticeable loss of grip from the harder tyres. It’s still not as sharp to drive as a 3-Series, but makes a strong case for itself nonetheless.