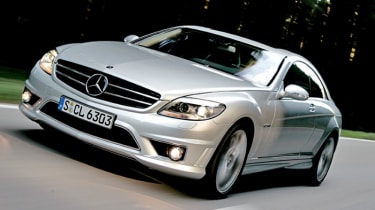 The CL63 AMG is very nearly the perfect compromise between sumptuous luxury and unstoppable power. Only the firm ride quality leaves us unconvinced, but otherwise this is one awesome coupé – which, for £105,000, it should be. However, it is hard to think of many drivers in the UK who will need more performance than the £79,550 CL500 already offers.

Merc's new CL63 AMG sounds like a close relative of the McLaren SLR, its snarling roar will cause passers-by to stop and stare. With a spectacular 518bhp, can the mighty newcomer put an end to the supercar power struggle once and for all?

Touted as the ultimate Mercedes, the AMG focuses on being as sporty as possible. Huge 19-inch alloys complement the CL’s bodywork, which also gets new air scoops and side skirts.

Slip inside, and the S-Class-derived cabin is predictably luxurious, with figure-hugging seats and several sporty extras. The highlight is a neat AMG dial package, with a special stopwatch to record lap and acceleration times. It’s called a Race­timer, and should have some impressive figures to log. As the Merc weighs more than two tonnes, it’s hard to believe it can glide from 0-62mph in only 4.6 sec-onds. And that’s just the beginning...

Once the rear tyres have stopped struggling for traction, acceleration never lets up. The bellowing engine note continues up to 7,200rpm, with peak power arriving at 6,800rpm and 630Nm of torque at 5,200rpm. This ability to rev is what sets the AMG variant apart from the CL600, which has a lazier low-down punch.

The secret is a new all-aluminium V8. With no turbo or supercharging, it claims to deliver higher bhp and Nm of torque per litre than any equivalent unit.

What’s more, a seven-speed auto is standard. It has only recently been dev-eloped to cope with this level of torque, and offers super-quick changes. Equally impressive is how the CL slows down. AMG high-composite brakes give the four-seater stopping power to match its acceleration. Yet the big Merc isn’t perfect. Its sports suspension is a develop­ment of the standard air set-up, but it feels too firm, which makes the softer CL600 seem the more sensible option.

So, is the AMG the pick of the CL range? Only if you have very deep pockets. As if the list price wasn’t steep enough, you’ll have to fund a sub-20mpg thirst for fuel. Unless you intend to use your CL on the track, the CL500’s 5.4-second 0-62mph time will probably more than suffice. The 63 AMG has a glorious soundtrack, but most buyers will be better off leaving it in the garage.