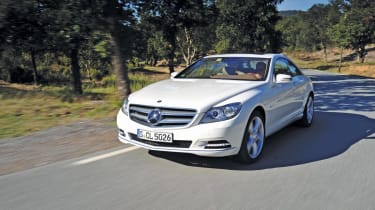 It’s hard to see how Mercedes could extract more performance and better fuel economy from an eight-cylinder engine. Thanks to stop-start, special tyres and turbocharging, 429bhp and 29.7mpg are possible – with more than enough power for most. But with prices starting at a little under £90,000, Merc’s flagship coupé doesn’t come cheap.

It's official – Mercedes range-topping coupé is going green! We’ve already tried the storming new CL 63 AMG, but now it’s time for the ‘entry-level’ CL 500 BlueEfficiency – which boasts 12 per cent more power and 23 per cent better fuel economy than before – to earn its stripes.

But Mercedes hasn’t forgotten what makes the CL so impressive, and with 429bhp and 700Nm of torque, there’s nothing ‘entry-level’ about the performance. Despite being hushed on the motorway, floor the throttle and the V8 does an excellent impression of the more hardcore AMG variants.

Switch the Active Body Control to its Sport setting and take manual control of the seven-speed auto box, and the two-tonne CL can be hustled along at a pulse-quickening pace. Overly light steering and a 5.1-metre length mean it’s far from a sports car, though. Think of it more as a coupé version of the S-Class.

Two new systems – Active Lane Keeping Assist and Active Blind Spot Assist – have been added to the CL’s already impressive portfolio of safety equipment. The former vibrates the steering wheel if you veer out of your lane, and actively steers you back if you fail to react, while the latter alerts you via a light in the wing mirror and an alert tone if another car is in your blind spot.

Thanks to a new, more-upright radiator grille, reprofiled bonnet and LED running lights, the refreshed CL looks striking even without the optional AMG styling pack, which 50 per cent of customers are expected to go for. The interior is full of leather, wood and chunky metal, while the individual rear seats feel snug, but offer plenty of room.

As a fast, luxurious, four-seater coupé, the new CL really is hard to fault. But it’s destined to remain a niche choice in the UK, especially with a price tag of almost £90,000.

Rival: Continental GT Bentley’s sharper styling and updated engines – including a new 4.0-litre V8 that will take on the CL 500 – have brought GT back to the top of its game.