Mercedes has given its fire-breathing coupé a mid-life facelift, with the twin-turbo V8 engine now boasting efficient technology updates. 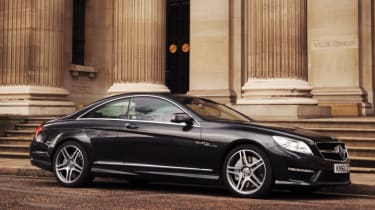 The CL63 AMG is all about its engine. Mercedes has downsized the V8 from 6.3 to 5.5 litres, but by adding a pair of turbos, it’s boosted power and efficiency. There’s few better sounding engines in the world, and while the facelifted CL is still a big, heavy car, it can cruise on motorways with ease, and is fun on B-roads, too. Light steering and a firm ride around town are the only black marks for this accomplished all-rounder.

Take a Mercedes S-Class, send it to the gym, and this is the result! The CL coupé has always been big and fast, but now, thanks to subtle styling tweaks and a new range of eight and 12-cylinder engines, it’s more accomplished than ever. We drove the 536bhp CL63 AMG on UK roads for the first time.

Diehard fans of Merc’s tuning division AMG might complain about the firm swapping its storming naturally aspirated 6.2-litre V8 for a smaller-capacity unit – but the new 5.5-litre direct-injection twin-turbo V8 is an absolute masterpiece.

Not only does it churn out an extra 19bhp and 170Nm more torque – at a huge 800Nm – but it uses 25 per cent less fuel, thanks in part to a standard stop-start system. And anyone who associates turbocharged engines with delayed throttle response is in for surprise.

Despite its size, the CL63 rockets off the line, covering the 0-62mph sprint in 4.5 seconds. Specify the optional performance pack, which adds another 27bhp, taking power to 563bhp, and that drops by a tenth of a second, while the 155mph limiter is also removed, giving the CL63 a potential top speed of 186mph.

With or without the extra power, torque at low revs is plentiful, so the CL is as good at wafting around town as it is showing Porsches a clean pair of heels. And it produces the most sublime roar from its quad exhausts – another pleasant surprise for a turbo engine.

The 7G Tronic automatic gearbox makes the most of the CL’s split personality, blurring the ratios brilliantly in full auto mode, and reacting swiftly enough in manual mode for an engaging driving experience. In fact, it’s automated manuals such as this that are making some car manufacturers think twice about the benefits of heavier and more expensive twin-clutch boxes.

Switch the Active Body Control to its Sport setting, and the CL can be hustled along twisty roads at surprising pace. But an over-light steering rack, the car’s 5.1-metre length and the fact that it weighs more than two tonnes means the Merc is far from a sports car. As with all AMG models, the CL63’s suspension is firm, even in its softest setting, but with its plush leather seats, host of luxury gadgets and excellent refinement at motorway speeds, it’s clear that comfort is an important factor for the CL’s loyal customer base.

Two new systems mean it’s a safe place to spend time, too. Active Lane Keeping Assist vibrates the steering wheel if you veer out of your lane and automatically steers you back on line, while Active Blind Spot Assist alerts you via a light in the wing mirror that a car is sitting in your blind spot.

Because of its high price and petrol engines, the CL has never sold in huge numbers in the UK. Despite this revised version being better in every way, that’s how it’s likely to stay. But those who do take the plunge will be rewarded with a magnificent grand tourer.

Rival: Bentley Conti GT Lighter and faster, the all-new version of Bentley’s hugely successful coupé has been improved in every way. An efficient V8 variant, predicted to be the big seller, arrives in 2011.