Mercedes’ A-Class based CLA four-door coupe has performance option. How does the Mercedes-AMG CLA 35 stack up? 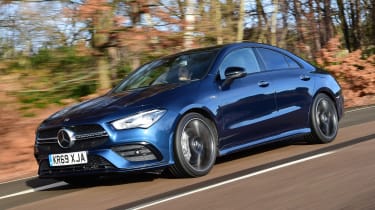 The CLA 35’s biggest problem is its A 35 Saloon relative. The two feel much the same to drive and have the same great engine, but the A 35 is cheaper and is a little more practical despite its marginally smaller boot. As with so many premium four-door coupes, the appeal of the CLA 35 Coupe over its more flexible siblings lies almost exclusively in its swoopier styling.

The Mercedes CLA rounds off the wider A-Class line-up as a stylish four-door coupe or Shooting Brake estate that takes more than a little inspiration from the larger CLS.

The fact that the A-Class Saloon exists at the same time as the CLA is testament to Mercedes’ fondness for niche-filling – as is the fact that both can be had in AMG-fettled 35 and 45 versions. These two performance-orientated models cross over on remit and even share rivals in the market; only the forthcoming BMW M235i Gran Coupe will square-up to the CLA 35 directly, while the Shooting Brake version stands in a class of one.

The CLA 35 is more expensive and slightly better-equipped as standard than its A 35 counterpart but mechanical differences are marginal; the pair share identical engines, gearboxes, four-wheel drive systems and wheelbases, but the CLA is ever-so-slightly longer and boasts a wider track that, according to Mercedes, makes it sharper to drive. 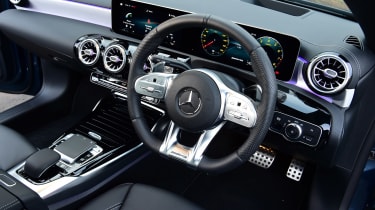 Driving both back-to-back, these small differences are very hard to detect. A bigger change is clear on our top-flight Premium Plus test car, however; its adaptive suspension is a much better match for the CLA’s character, offering a smoother and more controlled ride than the standard passive system, even in its stiffest setting. The system helps to tame some road noise too, eliminating some of the standard set-up’s excessive tyre roar.

It’s a must-pick option regardless of which 35 you choose but only comes as part of the £6,000 Premium Plus pack; spec the Saloon and CLA version like this and there’s a £1,355 difference in total price between them.

In use the 306bhp 2.0-litre engine is just as effective as in other applications – the CLA 35 feels hugely quick in everyday driving. Light, accurate steering gives just enough feedback to keep the driver engaged and the four-wheel drive system is flattering rather than intrusive. The highly strung four-cylinder’s jarring clatter at idle and low speeds is not very becoming of a Mercedes, however.

Elsewhere, entry-level CLA 35 buyers benefit from a small amount of extra equipment. Where the A 35 Saloon opposite gets two seven-inch infotainment screens as standard, the CLA 35 replaces the central media screen with a 10.25-inch item; other differences include the CLA’s standard, more comfortable fixed-headrest sports seats and a set of stainless steel pedals. You’ll still need to climb the trim levels to get all the best equipment. 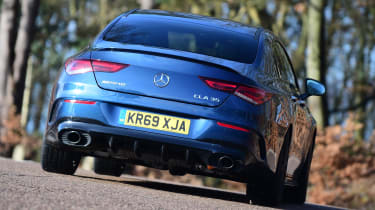 That dramatic roofline lends a look that’s certain to sell but the trade-off is reduced headroom and hampered access to the rear seats thanks to a low, thick C-pillar – a potential problem for those regularly fitting child seats.