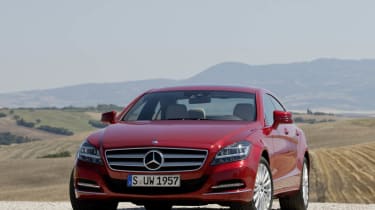 The new Mercedes CLS may not be quite as ground breaking as the original, after all that one created a whole new class of vehicle - the four door coupé. But, following our first drive of the 3.5-litre V6 petrol, there was no doubt the new model is better than its predecessor in every conceivable way.

Now though, we have tested the 350 CDI, which has a new 3.0-litre V6 diesel. And it’s this version which is going to be the best seller. It’s blend of effortless performance and impressive economy suits the nature of the CLS far better than the petrol. In fact the new diesel is 21 per cent more efficient than the one in the old Mercedes CLS 350 CDI. Economy is now up to 47 miles per gallon yet with 262bhp on tap it’s more powerful too and capable of the benchmark 0-62mph sprint in just 6.2 seconds. But it’s the in-gear shove that’s most impressive, making the CLS perfect for motorway overtaking. And because the car’s new slick seven-speed automatic gearbox, which is standard on the 350 CDI, comes with paddle shift you can change gear yourself. This facility enhances the CLS’s fun factor when the road gets twisty. Our test model came with Sports’ suspension which uses a slightly firmer set-up than standard. It makes the CLS feel slightly sharper and more responsive through corners. There doesn’t seem to be that much of a trade of in terms of comfort although we were testing the car on the smooth roads of northern Italy. We will have to wait and see how it feels on bumpy British tarmac to be sure though. However, regardless of which suspension setting you go for, the 350 CDI version of the new CLS is the pick of the range.