We get to grips with the diesel version of the latest incarnation of the original four-door coupé. Does it have what it takes to fend off rivals from Audi and BMW? 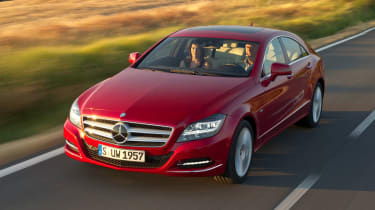 The first CLS introduced the world to the four-door coupé, and while the new car’s styling doesn’t break the mould in a similar fashion, there’s no doubt that it’s better in every other way. What’s more, if you opt for the new diesel engine, you get a decent mix of performance and economy, which means that this the best all-rounder of the CLS range.

Advertisement - Article continues below
When Mercedes launched the original CLS back in 2004, it didn’t just produce a new car, it created a whole new class of vehicle – the four-door coupé. And while Audi is just getting in on the act with its upcoming A7, Mercedes is forging ahead with an all-new second generation of its revolutionary executive.
Video: watch CarBuyer's video review of the Mercedes CLS
[[{"type":"media","view_mode":"content_narrow","fid":"68647","attributes":{"alt":"","class":"media-image"}}]]
We’ve already driven the 3.5-litre V6 petrol, and there is no doubt that the new model is better than its predecessor in every way, albeit with a slightly restrained yet sophisticated sense of style. Now, though, we have tried the CLS 350 CDI, which has a new 3.0-litre V6 diesel. And it’s this version which is predicted to be the biggest seller.
The new diesel is 21 per cent more efficient than the one in the old CLS. Economy is now up to 47mpg, yet, with 262bhp on tap, it’s more powerful, too, and capable of the benchmark 0-62mph sprint in only 6.2 seconds.
But the in-gear acceleration impresses most, making the Mercedes perfect for motorway overtaking. Performance is truly effortless, and when you add in the economy delivered by the new engine, it’s clear that the oil-burner is far better suited to the CLS’ character than the larger petrol unit.
It’s not only motorways which are dispatched with ease. The slick new seven-speed auto, which comes as standard on the diesel model, has steering wheel-mounted paddleshifters so you can change gear yourself. This really enhances the CLS’ fun factor when the road gets twisty.
Our car also had Sports suspension, which uses a slightly firmer set-up than standard, and makes the Merc feel sharper and more responsive through corners. There doesn’t seem to be much of a trade-off in terms of comfort, either, although we drove the car on the smooth roads of northern Italy. We will have to wait and see how it feels on bumpy British tarmac.
However, regardless of which suspension you go for, this diesel version of the CLS is a strong contender in the sporting executive car market.
Rival: Audi A7
New challenger arrives in the UK in January, and it will run the CLS close with its stunning looks, long-distance comfort and sharp handling.
Advertisement
Share this on TwitterShare this on FacebookEmail
Advertisement