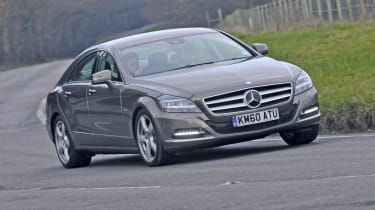 With its supreme refinement and muscular looks, as well as a better driving experience than the previous model, the new CLS is a success. Add in the powerful petrol V6, quality interior and extra space, and it’s one of the best all-rounders money can buy. However, with a new four-door version of the BMW 6-Series due in showrooms next year, the Mercedes is certainly going to find competition is fiercer.

Advertisement - Article continues below
When it introduced the CLS four-door coupé in 2004, Mercedes broke new ground. But rivals such as the Audi A7 and the Porsche Panamera have since stolen the limelight. Can the all-new CLS regain its place at the top of the pile? We drove it on UK roads for the first time to find out.
Video: watch CarBuyer's video review of the Mercedes CLS
[[{"type":"media","view_mode":"content_narrow","fid":"68647","attributes":{"alt":"","class":"media-image"}}]]
The latest model trades the flowing lines of the original for a more muscular stance, complete with sculpted wheelarches and strong creases. Up front is Merc’s new family face, which includes the upright grille inspired by the SLS AMG supercar.
Climb inside, and you notice a huge amount of attention has gone towards improving quality. The dash is trimmed in soft leather and all the switchgear feels bulletproof. As the new car is 3cm longer than before, rear passengers get more legroom, but head space is limited by the coupé-like roofline.
Advertisement - Article continues below
Advertisement
Advertisement - Article continues below

Despite the increase in length, as well as width, the new CLS is no heavier than before. This is mainly because the bonnet, bootlid, doors and wings are made of aluminium.
These lightweight materials also have a positive effect on performance. Our CLS 350 was equipped with a 302bhp 3.5-litre V6 petrol engine, and sprints from 0-62mph in 6.1 seconds. The powerplant pulls smoothly throughout the rev range, while the seven-speed automatic transmission offers smooth and lightning fast gearshifts.
Through corners, the Merc handles well for a car of its size, and strikes a fine balance, with decent body control and accurate steering. It’s not thrilling in the same way as an AMG version,
but it’s composed and enjoyable to drive. It’s also comfortable and refined. The powerplant is barely audible, the ride supple enough to soak up the worst UK roads have to offer and the stop-start system works so seamlessly that you won’t even notice it.
With this fuel-saving technology in place, Mercedes claims economy of 41.5mpg combined, as well as CO2 emissions of 159g/km – both incredible figures for a petrol-driven V6. The CLS 350 CDI
diesel promises 47.1mpg, but in everyday driving conditions we would expect it to extend its economy lead over the petrol.
Whichever engine you choose, though, the CLS’s huge range of abilities makes it a car worthy of a place at the top of the class.
Advertisement
Share this on TwitterShare this on FacebookEmail
Advertisement