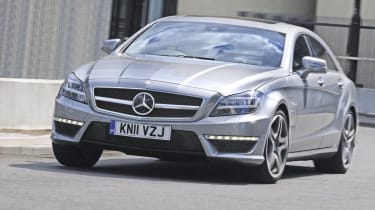 For such a brutish-looking car, the CLS 63 AMG delivers surprisingly delicate handling, which makes it far more fun to drive fast than its two-tonne kerbweight and huge footprint would suggest. The twin-turbo 5.5-litre V8 is an incredible piece of engineering – it’s powerful, sounds fantastic and plays a large part in the 32 per cent improvement in fuel efficiency. If the styling is to your taste, then this car really does tick all the boxes. It’s AMG at its very best.

Gone are the days when AMG Mercedes models were one trick ponies delivering warp-speed acceleration and little else. Now, rocketships like the new C63 Coupe prove that the tuning arm has the handling know-how to finally take on BMW’s M Division.

But can it really turn a near-two-tonne CLS into something sporty? The new CLS 63 features the latest 5.5-litre V8, instead of the 6.2-litre that powers the two-door. This delivers 518bhp and 700Nm of torque (or 549bhp and 800Nm with the optional AMG performance pack). As a result, 0-62mph takes only 4.4 seconds, yet remarkably, this car uses 32 per cent less fuel than the previous flagship CLS, thanks to direct-injection and stop-start. Not that these eco considerations are obvious when you fire up the big V8. It barks into life, and lets you know that this is still very much a brutal performance car. At low speeds, the AMG SPEEDSHIFT automatic box blurs its seven ratios beautifully, making the CLS 63 just as easy to drive as the standard model. A Jekyll and Hyde character transformation is only a flick of a switch away, though, with four modes for the engine and transmission available.

The ECO setting activates the seamless stop-start function and dulls the responses of the major controls, while Sport and Sport Plus sharpen the car’s reactions. Manual mode allows you to take control via the steering-mounted paddles, and while shift times can’t match a twin-clutch box, the transmission is fast enough, with a flamboyant blip of the throttle on downchanges. The three-mode adjustable suspension doesn’t provide a bone-shaking ride, even in its firmest setting, and the three-stage ESP can be turned off for tyre-smoking slides. Acceleration is immense, with a bellowing roar from the quad exhausts. But this car is much more than a straight-line monster.

The real magic is in the way AMG has made the CLS feel so light on its feet and turn into corners with such immediacy. The margin between this and the C63 AMG Coupe is smaller than you might think. And all in a practical package offering space for four and a 520-litre boot.

The standard model’s styling was judged to be a little heavy-handed compared to the original, but the AMG brings out the best of the muscular design, with its wider front track, sculpted bonnet and bodykit. Plus, the interior is a masterpiece in build quality, and mixes soft leather and piano black trim. It adds up to AMG’s most talented all-rounder ever.