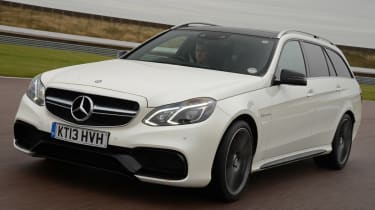 The E63 AMG Estate is  already such a great all-round performer that there’s no real need for the additional power. But then, you could argue that there’s no real need for an estate with over 500bhp to begin with. Of course this  niche appeal is all part of the car’s charm, and bearing this in mind, the extra performance and additional kit just about warrant the £10,000 price rise.

Just how quickly do you need to transport a wardrobe? Well, Mercedes reckons that  for some people its standard  E63 AMG Estate won’t be fast enough, so it has introduced an  S version with even more power.

The new car’s 5.5-litre bi-turbo V8 has been upgraded by 27bhp to 576bhp. This reduces the 0-62mph time by one-tenth to 4.2 seconds – not exactly a huge improvement. The extra 81Nm of torque is more significant, though. It further increases the S’s already monumental thrust which, at low speeds, makes the car even more likely to light up its wide rear tyres.

Thankfully, the S has a limited-slip diff as standard. This boosts traction when exiting corners, and makes the car capable of even more impressive slides with the traction control turned off on-track.

Considering the AMG S’s size and load-carrying ability, it’s  a very agile car indeed. The steering is precise and there’s plenty of feedback through the Alcantara-covered steering wheel. The S also gets 19-inch titanium grey alloys, which don’t spoil the ride despite their size.

In comfort setting, the  E63 AMG S Estate’s air-suspension simply dismisses bumps. However, when you  firm it up, using the button  on the AMG console, there’s a noticeable change in character  as the car suddenly takes on  a more focused character.

If there is one issue, it’s that the seven-speed auto gearbox isn’t quite as fast to react as  the dual-clutch system in the Audi RS6. Yet the rest of the  car is a lot more engaging.

The best news is that despite the added performance, the E63 AMG S Estate has exactly the same economy as the standard car, at 28.3mpg. However, fuel bills aren’t going to be a major concern for someone who is spending £85,880 on an estate.

The normal E63 gives the same thrills as the S. For some people, though, that’s not the point. What really matters is the bragging rights of owning the world’s most powerful wardrobe transporter.