How far has the Mercedes E-Class come in seventy years? We compare the latest model with six previous generations 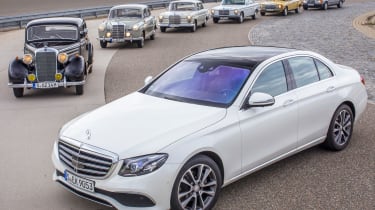 Mercedes’ iconic E-Class badge is now on its fifth generation, and the tech-laden model is our class-leading executive saloon, as our first road test confirmed. But it shouldn’t come as a surprise, given 13 million E-Classes have been sold globally.

Depending on where you are, it comes with a totally different reputation. In the harsh terrains of Africa and the Middle East, models from the sixties onwards became the celebrated byword for toughness and longevity, while in the US and most of Europe, it’s now a status symbol for the businessman. In Germany, and now the UK, it’s become a hugely popular luxury taxi or private hire vehicle.

While the E-Class name has only been used since 1993, the history of Mercedes’ executive saloons goes back far further. To give us a glimpse into where the latest model has come from, we’ve taken a trip down memory lane, with six previous generations at Mercedes’ Sindelfingen plant near Stuttgart where the 2016 model is built. 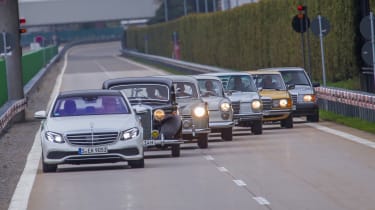 The ancestry of the E-Class stretches back to before WWII, but the heritage is clearest in post-war models. Although Allied bombing heavily damaged its factory, Mercedes was still able to produce its most popular model – the 170 family car. The design dates back to 1936, and our 1953 170 DS example, with running boards, an ancient chassis and separate wing design, looks decidedly old fashioned.

Our next trip up the E-Class family tree is more of a familiar shape. Known as ‘The Ponton’ (German for Pontoon) because of its bulbous wing design that epitomised cars of that era, the Mercedes 180 that debuted in 1953 was the brand’s first ‘unibody’ model – where the bodywork is a structural part of the car. That modern design set the tone for future models, as did the now commonplace ‘three-box’ saloon shape that made it more aerodynamic and practical.

Peter Pfieffer, former head of design at Daimler, describes how the 180 signified a “totally new era for car building in the post-war transport boom”. He adds: “Everything that followed was a very similar shape, so this car set the tone almost by accident.” While the Ponton was about function over form, Mercedes couldn’t ignore the flamboyance of the American market car any longer. In 1961, the ‘Fintail’ W110 was launched, so nicknamed because the distinctive shape of its rear made it look like a Cadillac. It may have carried over the dated ‘swing axle’ rear suspension design from its predecessor, but the Fintail was full of technical innovation that we take for granted today – developments such as automatic transmission, front disc brakes and a six-cylinder engine. Around 622,000 found homes in seven years, and the W110 was an immensely popular taxi around the world. 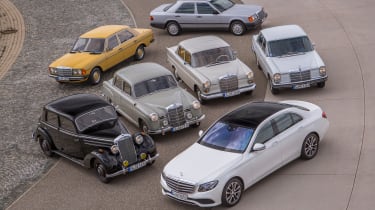 Things moved on even further in 1968 with the ‘Stroke-8’ W114. For this model, Mercedes developed comfort and handling significantly, with a brand new ‘trailing arm’ suspension design. And while the padded dash is a world away from today’s safety innovation, it showed Mercedes’ increasing commitment towards crash testing and the wellbeing of its passengers. The W123 of 1977 took that philosophy further still, by moving the fuel tank to the back of the car to reduce the risk of explosions.

It also introduced innovations such as fuel injection, anti-lock brakes and a driver’s-side airbag. Nearly 2.4 million were built over the years, and it was nicknamed “the wedge” because of its rigid lines and angles. Many are still used as workhorses in far flung parts of the world today; Moroccan government officials estimated around 55,000 examples were still being used as taxis in 2014.

The next generation, the W124, is the E-Class the ex-designers and engineers get most excited about. Former head of passive safety, Karl Heinz Baumann, who worked on crash testing and safety development for 26 years, calls it “a firework of innovation”. He explains: “W123 had big innovations, but the W124 was by far the biggest leap in terms of design and safety for occupants. It was the first car designed for offset [angled] crash testing, simulating the kind of accidents you have in the real world.” 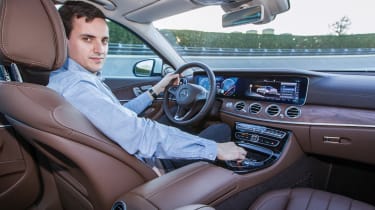 “The W124 was a pioneer, and the one I’m most proud of,” Baumann adds. While safety was a critical part of the W124’s development, it also moved the game on in terms of design. The high-strength steel structure was combined with advanced multi-link rear suspension to make it stiffer, lighter and better to drive. It was the first Mercedes to wear the now familiar E-Class badge to signify the revolution.

Unfortunately, Mercedes elected not to let us try out the next two generations of E-Class (The W210 and W211), perhaps because they weren't deemed significant enough. That means we jumped over two decades to try out the 2016 model.

Climbing into today’s E-Class, it’s easy to see how this safety focus has resulted in the mass of safety technology you find today. The exterior design has evolved slowly, too, but some have been critical of the more homogenous look between the new E and the current C and S-Class models.

E-Class product management head Leonard Gebel has an answer to this. “These three cars are a family – like children,” he says. “We have such a diverse product range that it is important to have familiarity in these three cars.”

Mercedes E-Class: behind the wheel 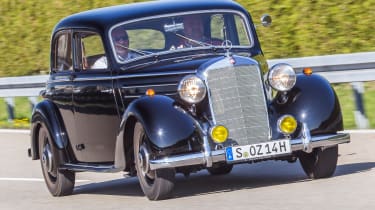 The start of the E-Class journey couldn’t feel further away from the new model. The driving position is awkward, with your knees crammed up against the huge steering wheel. This diesel model gives you an idea of how far oil-burners have come; it’s slow and very noisy, and the column-mounted manual gearshift is awkward. 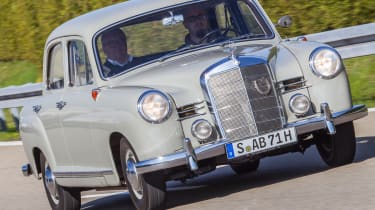 It looks totally different to the 170, but the Ponton feels very similar on the road – and at least this 1.9-litre petrol example has enough performance to get up a hill! The sloppy steering, woeful brakes and wayward handling remain, although the extra space and comfort meant it was a decent step up for passengers. 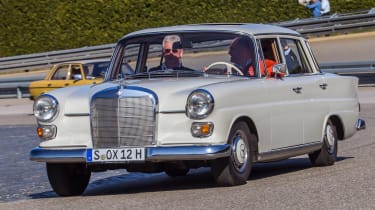 The ‘Fintail’ is the first of these Mercedes that starts to feel like a modern-day car. It’s helped by the relatively bold introduction of a four-speed automatic box, while the steering and suspension make it feel more stable in corners. The most notable upgrade is the brakes; the 200’s middle pedal finally inspires confidence. 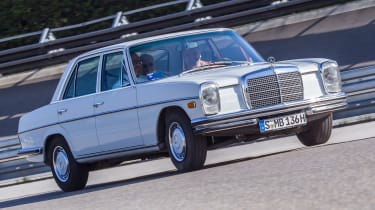 Our favourite of the bunch, the ‘Stroke Eight’ has aged extremely well, with its classy shape and impressively smooth straight-six engine. Other than an awkward clutch that makes pulling away tricky, the performance and composed handling (thanks to the new chassis design) mean it’s a classic car that you could genuinely relax in. 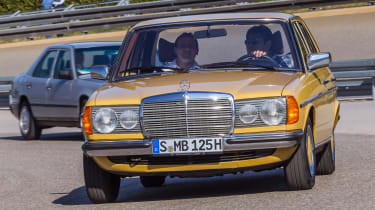 For many, this is the iconic Mercedes saloon. Our custard yellow example certainly turns heads, and the cabin trim is pure seventies. The 109bhp 2.3-litre engine in our 230 model may seem like a step down, but it feels fast and responsive. The ride comfort is great – modern cars would struggle to match its bump absorption. 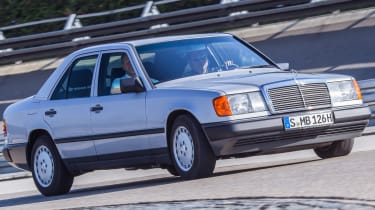 The one the designers and engineers all raved about: the W124 feels like a huge leap in terms of design, while our car even comes with modern kit such as cruise control and an electric sunroof. It may still have a four-speed automatic, but feels the most responsive and fresh of the lot. It’s amazing to think this car went on sale in 1984. 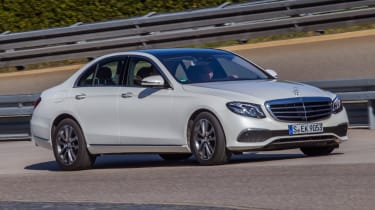 Step forward a few generations, and the 2016 E-Class feels like it’s from a different world. The massive infotainment screens, plush wood, leather and ambient lighting show you just how far this car has come over the decades. Amazingly, some of the older models beat it for ride comfort, but none can match its pace, handling and refinement.

What are your thoughts on the Mercedes E-Class and its 70-year lifespan? Leave us a comment below!

Newly facelifted Mercedes E-Class launched in the UK – and it’s priced from £39,130 for the base-model E 200 saloon
Facelifted 2021 Mercedes-AMG E 53 launched with 423bhp 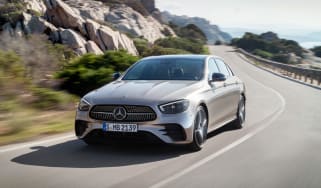 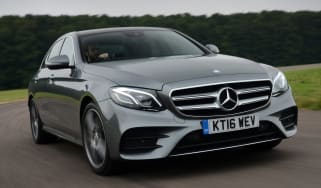