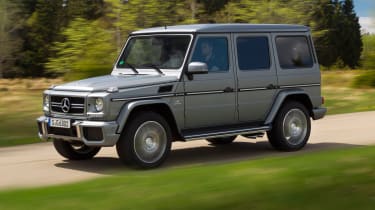 At more than £110,000, the G63 AMG is expensive for such an old design. The new engine and box are brilliant, though, giving incredible performance, and the interior is better than ever. But the chassis doesn’t match the potential and the running costs are terrifying. So while the G63 is huge fun, it’s outclassed by its rivals.

The old 500bhp G55 AMG was one of the craziest cars on the road, but that hasn’t stopped the tuning arm fitting its newest engine to Mercedes’ oldest model.
The new G63 AMG has 537bhp and 760Nm of torque, and goes from 0-62mph in 5.4 seconds. But due to its aerodynamics, and the 33-year-old design, the top speed is limited to 130mph.
Inside, there are some serious updates, including a new centre console complete with a layout and switchgear recognisable from current Mercedes models.
But despite the quality and luxurious appointments, there’s no disguising the old-fashioned flat windscreen, lofty driving position and narrow cabin. On the outside is AMG’s new twin-blade grille and a reshaped bumper with three air intakes.
Under the squared-off bonnet, the supercharged V8 has been replaced by a twin-turbo 5.5-litre V8 that’s also found in the latest SL 63 AMG. Keep the right pedal pressed to the floor and the G63 AMG explodes down the road, with an infectious V8 blare from the quad side-exit exhausts. If ever there was a car to bring out the inner child in its driver, this is it.

Take control of the excellent seven-speed dual-clutch auto box yourself – from the steering wheel paddles or transmission-mounted shift lever – and you can play around with the engine note.
Unlike the SL, though, the G63 AMG doesn’t pop or bang on the overrun – Mercedes says customers in this sector of the market don’t want it to.
Even though the new car delivers smoking performance in a straight line, it struggles in corners. All but the most gentle of curves cause excessive body roll, while grip is limited, despite the 4WD and AMG sports suspension.
Turn in sharply and the stability system cuts the power in a bid to bring things back under control – and unlike on other models from AMG, it can’t be turned off completely. To make swift progress you need smooth inputs; the old adage of ‘slow in, fast out’ rings truer than ever with the G63 AMG.
In fact, this car is best enjoyed when you’re not pusing to the limit, where the auto box shifts smoothly, the suspension soaks up the bumps and the merest tickle of the throttle is enough to wake the beast inside.
Share this on TwitterShare this on FacebookEmail