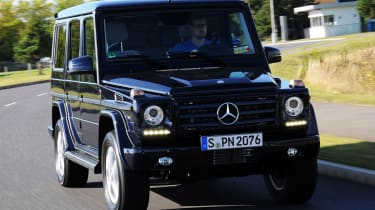 The G-Class is a car from the land that time forgot. It looks old fashioned and it costs a scarcely believable amount of money. But it’s also very well engineered and does have a powerful, modern engine and a really attractive new interior, in a rugged sort of way. Yes, the new Range Rover blows it away in almost every aspect, but the old-school charm of the G-Class is hard to ignore.

A lot has changed in the automotive world since 1979. But the Mercedes G-Class has remained more or less the same in all that time, with only minor facelifts, engine upgrades and a progressively plusher interior to keep it fresh.

Now, the stalwart Mercedes four-wheel drive has had its tenth major overhaul, which includes LED daytime running lights and new wing mirrors on the outside, plus a much improved interior.

It’s hard to imagine that the wealthy owners of today’s G-Class didn’t love Tonka toys when they were young. The two-box shape is straight from the sand pit, but despite the fact that it dates from the 70s, its design still has plenty of rugged appeal. You barely notice the new lights, but the more car-like wing mirrors offer much better rearward visibility as they don’t vibrate like the old ones did.

Open the door with a satisfying thunk, climb up into the cabin and it’s clear that this is where the majority of the upgrades have taken place. The dials are new, and feature a colour TFT screen that’s nice and clear to read.

A large, central colour screen that looks like a mini iPad displays sat-nav and radio options and allows you to connect to the internet – something unheard of in the 1970s. The centre console has also been redesigned in line with the rest of Mercedes’ passenger car range, and features buttons for the stereo and mobile phone, plus the three silver switches for the front, centre and rear diff locks.

Under the bonnet is Merc’s 208bhp V6 diesel, which was added to the G-Class line-up in 2011. It drives all four wheels through a slick seven-speed auto.

On the road, the view out of the G-Class is just about the best of any road car, given how high you sit and how thin the A-pillars are.

The steering is heavy and doesn’t self centre. The leaf-sprung suspension and low-tech ladder chassis help make the G almost unstoppable off-road, but on the road, its handling is fairly wayward and it takes a fair bit of effort to keep the car pointing in the direction you want. However, the ride is really good, helped in part by the fact that you feel like the G-Class is squashing bumps flat, rather than absorbing them.

The engine has to work hard to move the 2,570kg SUV, so noise is rather apparent, especially when you add in the tyre roar and wind noise from a car that’s as aerodynamic as a detached house. It’s not slow though, with strong acceleration only tempered by the over-enthusiastic traction control.