The Mercedes GLC and Jaguar F-Pace are both available with big V6 diesels, serving up practicality and performance, but which is better? 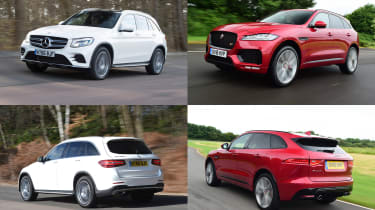 For most buyers, the Mercedes GLC and Jaguar F-Pace SUVs are at their best when they’re powered by four-cylinder diesel engines. These units offer the best balance of reasonable performance and economy, and they’re cheaper to buy in the first place.

But what if you want to put the sport into your sports utility vehicle? Here we’ve brought the more powerful and refined versions head-to-head. Both cars feature smooth 3.0-litre V6 turbodiesels with over 250bhp. The Jaguar F-Pace 3.0 S is a little larger, but it’s also more expensive to buy, while the Mercedes GLC 350d AMG Line has sporty looks and a torquey V6 under the bonnet.

While the price difference between the two is large, performance on paper is similar – so which one is best? 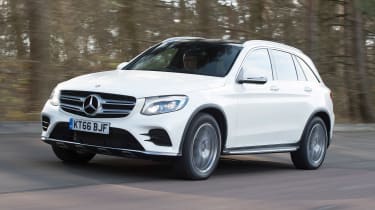 Mercedes has finally fitted its smooth, powerful V6 diesel engine to the GLC SUV, adding a new point in the range between the economical 220d and 250d at one end, and the more potent AMG 43 and AMG 63 at the other.

The 350d uses a 3.0-litre turbocharged V6 diesel with 254bhp; that’s less than the 296bhp Jaguar, and the 620Nm torque figure is lower than the 700Nm in the F-Pace as well. However, the nine-speed automatic gearbox means the ratios are set closer together, so the Mercedes was actually marginally quicker in our track tests. 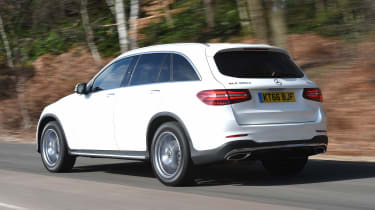 From 30-50mph in fourth gear the GLC feels mighty, taking just 2.8 seconds to cover the increment. The Jaguar is slightly quicker, taking 2.7 seconds, but the difference is small. From 50-70mph the Mercedes is faster, taking 3.7 seconds in fifth; the Jaguar took four seconds exactly. The GLC was six-tenths faster from 0-60mph as well, although both cars feel more than powerful enough.

The extra gear in the Mercedes means it sits at lower rpm at 70mph than the Jaguar – 1,350rpm in ninth beats the Jag’s 1,600rpm in eighth. The Mercedes engine is smooth, and the gearbox does well to keep the revs in the mid-range where maximum torque is. That helps the car to feel extra luxurious on the road, effortlessly getting up to speed without any fuss.

The Mercedes isn’t as sharp to drive as the F-Pace, because the steering is a bit numb and is on the light side, although you can add weight using the optional driving modes. It’s somewhat artificial, though, and doesn’t give the feeling of agility you get in the Jaguar. The Merc rolls through corners to the degree we’d expect of a big SUV, but that’s because the car is set up more for comfort. 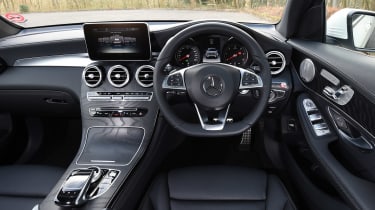 Whether it’s big potholes or speed bumps, the GLC feels smooth and rides well. Bigger bumps are softened off, and at speed the road surface is smoothed out. It goes well with the big engine, and the GLC will suit those who prefer a softer set-up.

The cabin feels every bit as upmarket as the Jaguar’s, but the tablet-style screen that sits on top of the dashboard looks a bit like an aftermarket addition. The materials used are clearly high quality, but the design seems a bit more old fashioned than the more modern-looking F-Pace.

It’s the same story on the outside, where the Mercedes has a more conservative look. It gets family styling cues, including the prominent front grille with a large three-pointed star. But the overall effect is a car that looks a little bulkier than the swoopy F-Pace. 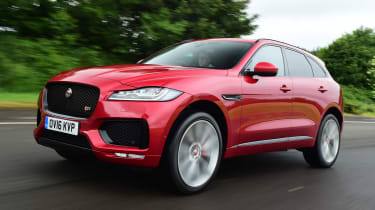 The Jaguar F-Pace is our favourite premium SUV, and the model won our Car of the Year award last year. We’ve been very impressed with the 2.0-litre diesel model’s balance of economy and performance. However, if you’ve got the cash to splash on a six-cylinder model, this 3.0-litre S model is a terrific choice.

What the Jaguar gets right is its balance of abilities. The engine is mighty while overtaking, as our in-gear tests showed. The Jaguar took just 2.7 seconds to go from 30-50mph in fourth gear. Still, the Mercedes is no slouch, taking just a tenth of a second longer to do the same; in fact, both of these SUVs have enough real-world pace to challenge some sports cars. The F-Pace has a hefty 700Nm of torque, 80Nm more than the Mercedes. 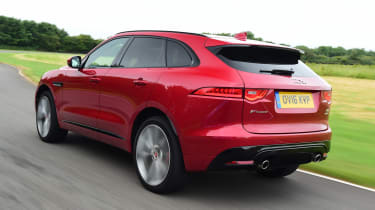 Still, the Jaguar was six tenths slower from 0-60mph in our acceleration tests; it took 6.6 seconds, while the 350d needed just 6.0 seconds to do the same sprint. Yet it’s the muscular and refined way the Jaguar delivers its performance that impresses. The 3.0-litre motor isn’t quite as hushed as the Mercedes’ engine, but it delivers a satisfyingly sporty growl. It’s also paired with an eight-speed transmission that serves smooth shifts in auto mode and crisp manual changes using the wheel-mounted paddles – even if these do feel a little plasticky.

The Jaguar returned 34.8mpg on our test – a respectable figure, but some way off the official number (a claimed 47.1mpg). But where the Jaguar has a real edge over the GLC is the way it drives.

The steering is quick, and while the big SUV isn’t as sharp as its saloon cousins, it feels more agile than a car of its stature really ought to. It is composed in corners thanks to a blend of ride and handling that mixes cornering ability with a suspension set-up that can handle rough road surfaces impressively well at the same time. 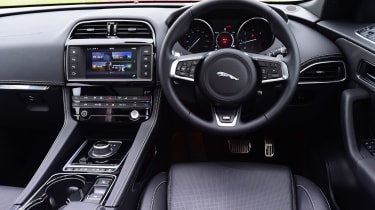 You can get the driver’s seat nice and low in the cabin, so the driving position feels sporty and comfortable. The dash is bulky and feels like it’s wrapping around you, which adds to the sports car impression you get inside.

It’s not the most inspiring design, and the cabin tends to seem a bit gloomy, but the Jaguar’s interior still feels classy and upmarket.

The F-Pace’s infotainment screen is more neatly integrated into the dash than the unit in the GLC, but the graphics on the Jag’s screen look a bit dated and it’s quite a fiddly system to use. Its overall functionality is better, mind you, and it does include a wi-fi hotspot. 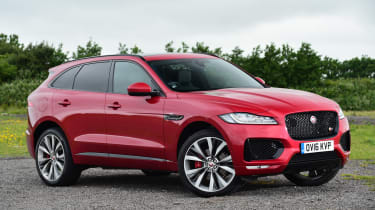 Jaguar’s F-Pace is spacious, stylish and fun to drive, which means it takes victory in our test. While it’s not as fast off the line as the Merc, the Jaguar’s composure and agility give it the edge on the road. The only problem with the F-Pace is the price, but its stronger residuals should offset the initial premium. 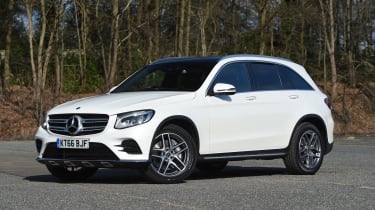 A smooth engine, comfortable ride and strong performance all work in the Mercedes’ favour, but it’s neither as good to drive nor as practical as the Jaguar. The GLC is a refined and well-built choice, but it doesn’t quite live up to the sporty character promised by its AMG Line badging.