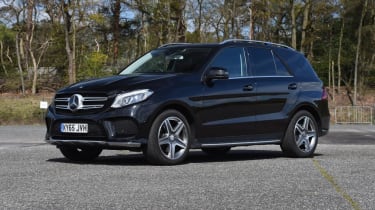 While the original ML-Class wasn’t very impressive, the second take was a more accomplished car, and Mercedes built on this for the ML Mk3/GLE. With strong and efficient engines, plenty of space and a luxurious cabin, the GLE feels every inch the premium product, but you’ll need deep pockets to buy and run one. This is also a superb towcar thanks to its high hauling capacity and four-wheel drive; this last item gives year-round security, too. Those intending to use their GLE off the beaten track should also seek out the rare off-road pack; this includes under-body protection, a centre differential lock, a low-range gearbox, extra off-road ride height settings and more driving mode options.

Mercedes’ first attempt at a luxury off-roader was the ML of 1998, and it was pretty underwhelming. The Mk2 that followed in 2005 was much better, but it was the third-generation ML of 2012 that really hit the spot.

This was renamed GLE in 2015, with a GLE coupé coming first (to rival the BMW X6), and the direct ML replacement soon after.

The GLE was more expensive than most of its key rivals, so it wasn’t always easy to recommend when new, despite the excellent engineering and superb safety credentials. But, as a used buy, these hefty Mercs make more sense, even if steep running costs are likely to be part and parcel of ownership. 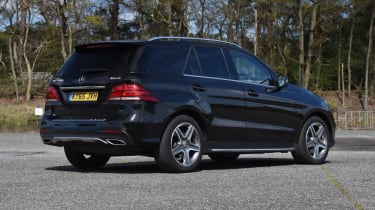 Either diesel provides decent performance and reasonable economy; the six-cylinder 350d is thirstier but more muscular. The ML-Class came in SE, AMG Line and AMG Sport trims; the GLE got AMG Line or AMG Night Edition trims, although only the latter was offered for the final part of its life. 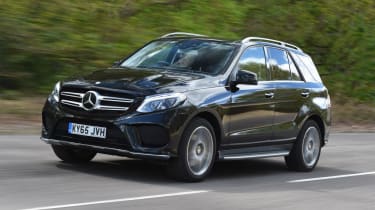 The Driving Assistance Plus package adds blind-spot warning, adaptive cruise control and lane-keep assist, so it’s worth finding cars with this fitted. The same holds for the Dynamic Package, with adaptive damping, air suspension and 21-inch wheels.

Alternatives to the Mercedes GLE

A Range Rover provides a sense of occasion the Mercedes can’t match, but running costs are high, while reliability reports are less than glowing. The same applies to the Range Rover Sport, which is better to drive but more costly than an equivalent GLE.

The Porsche Cayenne and BMW X5 are also good to drive, but again, purchase and running costs tend to be higher. The Jeep Grand Cherokee doesn’t have the Merc’s build quality but is superb off road, and purchase costs are relatively low – although the running costs certainly aren’t.

A VW Touareg is well equipped, has a great cabin, is comfortable, and comes with excellent engines, while the hybrid Lexus RX450h is superbly built, refined and well equipped, but not so great to drive.

The electrics are generally robust, but some of the sensors, switches and motors do fail, and repairs tend to be costly.

The air set-up is worth having for the benefit of improved comfort and dynamics, but it’s less reliable than the standard steel springs.

Be aware that a GLE used regularly for pulling heavy loads might well have tired and worn out brakes, suspension and transmission.

The GLE comes with no seven-seat option. You must trade up to a GL (later known as the GLS) to get seven seats. 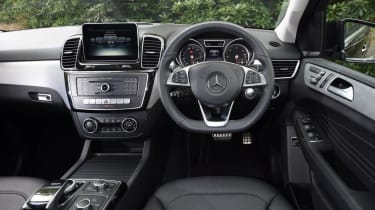 You can see where your cash is going inside. The fit and finish are superb, as are most of the materials, while the GLE’s cabin is bursting with equipment. The dash is easy to use once you’ve mastered it, but the infotainment isn’t as slick as rivals’. Cabin and boot space are good, but the big rear wheelarches hinder entry to the back. The boot holds 690 litres, or 2,010 litres with the seats folded.

All GLEs need servicing every year or 15,500 miles. The schedule runs minor, intermediate, major, at £390, £525 and £645; the only parts replaced in the minor are the oil and filter, plus an Adblue top up. The intermediate service is largely a series of checks; the major includes new air and fuel filters. All engines are chain-driven, and long-life coolant should not need renewing. Mercedes offers monthly and up-front transferable service plans.

Neither the ML-Class nor the GLE have featured in our new or used Driver Power surveys. Mercedes did appear in our 2019 Brands survey though, in 26th place out of 30 companies. Across the maker’s models the lowest scores were for running costs and ride/handling, with no scores in the top 10. All Carbuyer owner reviews give it an overall score of four or five out of five, however.