New Mercedes GLE is a worthy ML replacement, with even more tech and extra style 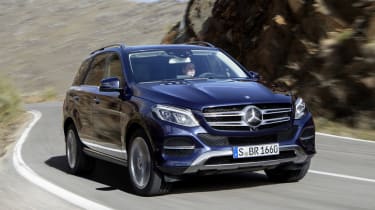 Overall, the GLE updates improve on the outgoing ML, with more speed, tech, style and efficiency. However, it’s not without its flaws. The ride is unsettled on poorer surfaces, and in 250d form the engine still feels flat. A new nine-speed auto improves the overall experience, but next to its main rival – the BMW X5 – the GLE isn’t as fast, as efficient or as good value for money.

Following hot on the heels of the new GLE Coupe that debuts Mercedes’ latest SUV naming structure, this is the GLE 4x4. It’s more of a straight-up off-roader that’s actually a heavy facelift of the old ML model, but with Merc’s new fresh family design, it’s more stylish than ever.

The GLE now gets a similar front-end look to its Coupe counterpart and other models in the range, so there’s a more swept-back appearance to the car than its square predecessor. Merc’s huge grille sits pride of place above two big front air dams and houses the oversized three-pointed star logo.

At the back the changes are more subtle; the old ML’s roofline has been carried over so the most notable alterations are to the taillights and a slight bumper redesign. It’s a smart makeover that brings the car bang up to date. Sharing its interior design with the GLE Coupe, there’s also lots of tech on offer even in the entry-level 250d Sport model, including a bigger, clearer infotainment screen compared to the old ML. 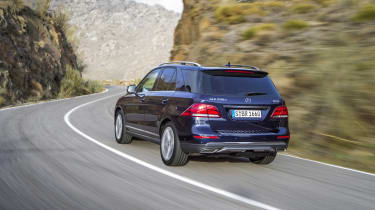 The 250d’s 201bhp 2.1-litre turbodiesel takes a while to get going, though. There’s just enough shove available thanks to the 500Nm of torque coming in from 1,600rpm, which gives good low-down response for around town driving. The 0-62mph sprint takes 8.6 seconds, but on more open, faster roads you have to rev the engine hard. The smooth nine-speed auto shuffles gears around well to make the most of what the GLE has to offer, however, it’s not the nicest sounding unit – the 250d in the old ML pumped out an agricultural diesel clatter and the GLE isn’t much of an improvement.

If you want more power (and less noise), there’s also the same, sweet 350d V6 diesel from the GLE Coupe, as well as a GLE 500e hybrid and the snarling AMG GLE 63 S super-SUV at the top of the range. Be warned, there’s one real drawback with the hybrid – the battery pack eats into boot space significantly, dropping the GLE’s load bay from a sizeable 690 litres to just 480 litres. Even Mercedes’ new GLC SUV in the class below has more luggage room. 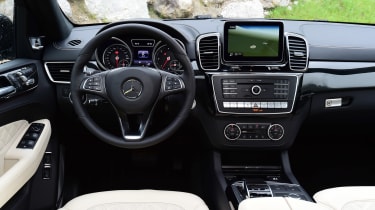 Stick with the non-hybrid models and the GLE should be easier to live with. Prices start from £49,280 for the 250d – although it can’t match the 500e’s 76.4mpg on paper, returning 47.9mpg and 155g/km CO2 it’s the next best when it comes to efficiency. However, for around £400 less you can get a BMW X5 with a more powerful and equally efficient 3.0-litre turbodiesel engine. 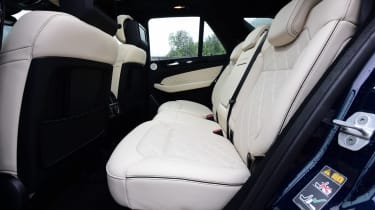 There are a number of extras you can add, too, including an Entertainment package that brings TVs in the rear seats, and an Off-road package that gives an extra off-road+ driving mode, a low-range gearbox and a locking centre differential for extra grip on lose surfaces. There’s also a Dynamic pack (not available on Sport models), which adds adaptive Airmatic suspension, replacing the standard steel springs on the base 250d.

For a premium SUV the car has plenty of all-terrain ability, and with the optional off-road pack there are selectable ride heights to increase ground clearance. Low-range and hill descent control complete the raft of electronics to keep you on the move when the going gets tough.

It’s unlikely that the GLE will stray too far away from the tarmac, though. On the road is where it’ll spend most of the time. We tried the car on the adaptive suspension and in Comfort the ride is settled, helped by the smaller 19-inch wheels and taller tyres. However, as with the old ML, it’s still on the firm side. 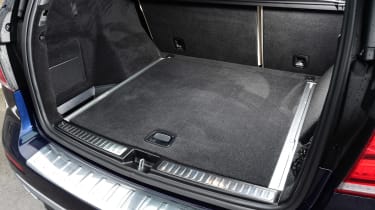 Ramp things up to Sport and, like the GLE Coupe, the regular 4x4 gets even firmer – it impacts on ride quality, but if you’re after more control the suspension ties down the GLE’s considerable 2,150kg bulk more effectively, reducing roll. The steering is light – even in Sport – but it means lots of easy manoeuvrability.

The GLE’s updated styling is the main thrust of the new car, though – and it’s a big improvement here. With the new nine-speed automatic transmission, the engine range is better than ever, but it’s the 350d that’s still the sweet spot.