With a new name and a revised diesel engine, the Mercedes GLE takes the premium SUV fight to the hybrid Lexus RX 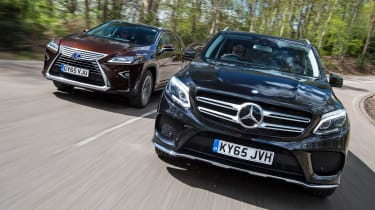 Mercedes’ latest product range, including cars such as the GLC and GLE Coupe, kick-started the firm’s new naming convention, so it was only right that the old ML model would fall into line, too.

As a result, that car is now called the GLE (GL for off-roader, E highlighting that it’s executive size, like the E-Class saloon). And while it’s still based on the old ML, there are some subtle styling changes to take in and more important modifications underneath.

The first is the addition of Mercedes’ nine-speed automatic gearbox, while the 350d V6 diesel model we’re testing here also boasts efficiency improvements to cut running costs. However, if you want a smooth, efficient SUV with enough power to make decent progress, there is another option. 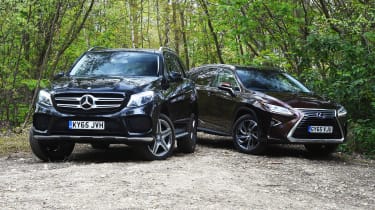 Lexus’ RX 450h does away with diesel power, instead combining petrol and electric motors to deliver performance and – on paper – penny-pinching fuel bills.

It’s packed full of technology too, whereas the Mercedes’ older underpinnings are a little more obvious. So, despite the new name, is the GLE starting to show its age, or has the old dog been taught a few new tricks?

Neither of our models is likely to venture too far from the tarmac, but if you want to explore off-road, the Mercedes is the more capable car. Lexus’ hybrid drive isn’t as well suited to slippery, rough terrain, whereas on the GLE, you can specify a £1,985 off-road pack that adds a locking centre diff, off-road driving modes and adjustable ride heights. 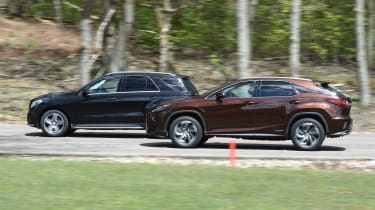 The RX’s petrol engine makes for much lower CO2 emissions than the diesel Mercedes, but it also has decent performance thanks to a pair of electric motors. The engine only drives the front wheels to further improve efficiency, with the motors adding rear traction. However, the non-plug-in RX’s zero-emissions range is limited.

Back-to-back, it’s easy to see that these two cars have their roots in different areas. The Lexus looks sportier, with a sleeker profile, whereas the boxy Mercedes sits higher. Alongside the sportier GLE Coupe, the GLE offers extra practicality. 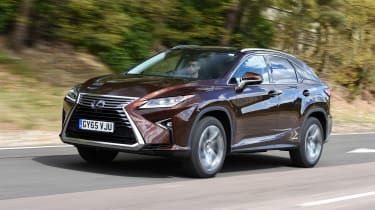 For a hybrid, the RX’s real-world efficiency isn’t so impressive, but low CO2 emissions mean you can run a luxury SUV on a relatively small budget. It feels much more modern inside than the GLE, with superior build quality and more kit. It’s not quite as spacious, yet there’s plenty of room for the family, making it a nicely refined and luxurious 4x4 with adequate performance. 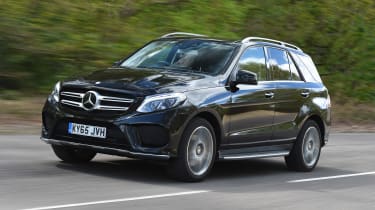 The GLE’s powertrain oozes class and refinement, but the chassis really lets it down. It’s comfortable at cruising speeds, yet it quickly loses its composure on bumpier roads. And while the ride is soft, it often lacks control over even smooth but undulating surfaces. An old-school interior, less equipment and steep running costs seal the Mercedes’ fate. 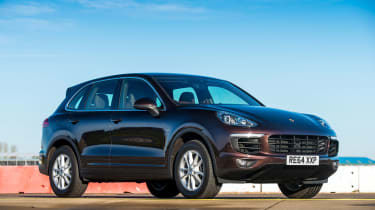 Porsche’s entry-level Cayenne Diesel undercuts both the GLE and RX on price, but easily matches them for performance. It’s sportier to drive and doesn’t sacrifice practicality, yet does have a firmer ride. The Porsche badge adds appeal. 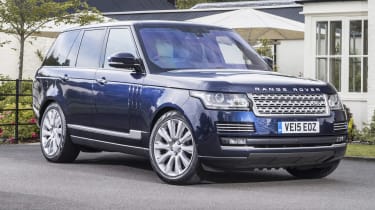 A similar budget will buy you a used Range Rover in well equipped Vogue SE spec with the powerful V8 diesel. The big Brit is a master of luxury and comfort, but even at this price, second-hand cars will have covered around 50,000 miles.