It's Mercedes' new social climber! The latest M-Class has hit the road, and Auto Express is the first British magazine to get behind the wheel. It's a car that aims to better the new Range Rover Sport and BMW X5 when it arrives here next summer. 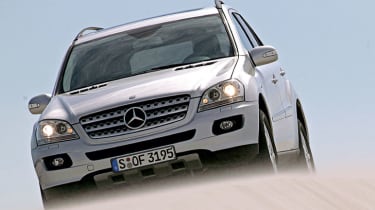 It looks like a direct descendant, but this M-Class is all-new and very different to the current car. Instead of being designed for a niche market, it's been developed from scratch as a fine-handling road car and a competent 4x4. The Merc also promises practicality and better quality. The big challenge will be when it meets the Range Rover Sport.

It's Mercedes' new social climber! The latest M-Class has hit the road, and Auto Express is the first British magazine to get behind the wheel. It's a car that aims to better the new Range Rover Sport and BMW X5 when it arrives here next summer.

We were granted access to an early ML350 so we could give our first impressions of the machine the German firm says will boost the model's reputation, and lay to rest the claims of poor build quality and lacklustre performance which blighted its predecessor.

And on first acquaintance, it's a job well done. Mercedes has been careful to ensure the newcomer builds on all the elements that make the current car so popular. That means the M-Class is still an imposing beast - tall, wide and aggressive, with styling that, although fresh and modern, continues with the silhouette of 1998's original.

The interior build quality has made a giant leap forward. The previous car's loose-fitting switches and harsh plastics have been replaced by a cabin that bears all of the hallmarks of the firm's more prestigious models - soft-touch buttons and a precise, gap-free finish to the dash and door trims.

There's also more space than be-fore, most noticeably in the back where the leg, knee and elbow room have all been increased. Safety is set to be a key selling point as well, and every new M-Class comes with the Pre-Safe accident detection system, while Airmatic air-suspension and a new four-wheel-drive system called 4-ETS will help keep things on the straight and narrow. The Airmatic suspension and new drivetrain are designed to give the M-Class better off-road capability than before.

The big Mercedes will rival the Land Rover Discovery and VW's Touareg in rough terrain thanks to electronically lockable differentials and a selectable ride height. Long suspension travel, traction control and a low-range gearbox are further strings to its bow.

Although we weren't able to put this early prototype to a full road test, it was clear from behind the wheel that Mercedes has worked hard to give the M-Class a much more dynamic feel.

The driving position is first rate and the seats are supportive, while the ride and steering are a significant step forward from the old M-Class. With the company's new 272bhp 3.5-litre V6 petrol engine seen here, the entry-level ML350 provides a decent blend of refinement and economy, while a new 190bhp 2.8-litre V6 diesel is expected to take most UK sales. Other engine choices include a 224bhp 3.2-litre oil-burner and a top-of-the-range 5.0-litre petrol V8, delivering 306bhp.

All models are fitted with a seven-speed 7G-TRONIC auto box as standard, making this the first time that the innovative transmission has been link-ed to an oil-burner. Unlike other cars in the range, the gear selector isn't in the conventional position, but fixed to the right side of the steering wheel to allow the driver touch control.

UK sales of the new M-Class will start next September, six months after the car appears in showrooms across the US and Europe. On first impressions, we think it will be well worth the wait.