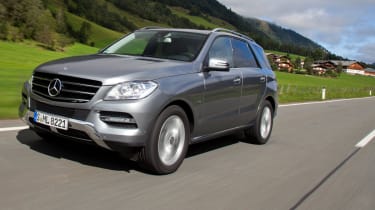 When we last drove the M-Class in July, Mercedes was still debating whether to bring the ML 250 CDI to our shores. But bosses have seen sense, and it’s a great addition to the range. It boasts the refinement of a V6 diesel with improved fuel economy and much lower running costs. It could do with a little extra punch, but this is still the engine to go for.

Meet the big SUV with small bills. In an effort to undercut the running costs of its BMW X5 rival, Mercedes has introduced a frugal four-cylinder turbodiesel to the new M-Class line-up – and it will go on sale next April.
The super-economical ML 250 CDI joins the revised 3.0-litre V6 diesel ML 350 CDI in the range. The newcomer has a 2.1-litre powerplant, with a healthy 201bhp power output and 500Nm of torque. That matches the punch of the previous entry-level V6 model – an impressive feat. Even better is the fact that the ML 250 CDI is the most frugal car in its class, with fuel economy of 48mpg and CO2 emissions of 158g/km.

But can it cope on the move? Four-cylinder units are generally noisier and rougher than their V6 counterparts, yet Mercedes has done a fantastic job of muting the diesel engine. Motorway driving is also a relaxing affair, thanks to an impressive absence of wind noise and tyre roar.
The ride is very comfortable, especially with the optional air-suspension. Body roll is kept in check reasonably well, too. The M-Class doesn’t have the agility or steering precision of an X5, but it’s much more enjoyable to drive than its predecessor, and still covers great distances in a very relaxed manner – as a large Mercedes should.
Performance isn’t staggering, with 0-62mph taking 9.0 seconds, but the only time you really notice a slight lack of shove is when you try to overtake at high speeds – the ML 250 CDI needs more time to gather momentum than the more powerful ML 350 version.
Off-road ability is great, though, and Mercedes offers a hill descent system, lockable differentials and several traction settings as part of an option pack. We tried a route full of steep inclines, loose rock, muddy tracks and deep water, yet the four-wheel-drive M-Class didn’t struggle once.
Cabin quality was already excellent in the previous version, but this new generation is another step forward. The leather-covered dash and unvarnished wood are the highlights of a  luxurious and solid interior.
Space won’t be a problem, either, with huge amounts of room for all occupants. The boot can swallow 610 litres of luggage with the rear seats up, or 2,010 litres with them down.
Share this on TwitterShare this on FacebookEmail