We hit British roads in the the most powerful Mercedes M-Class ever, the new 518bhp ML63 AMG 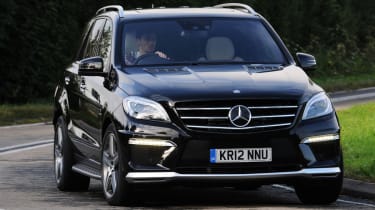 The Mercedes ML63 AMG is an impressive example of a performance SUV, which matches the performance and handling of a car that's much smaller and lighter. But, it’s missing the involvement that drivers will get from a Porsche Cayenne and that’s a crucial ingredient for creating a super-SUV. If you really are after an M-Class, the sensible money would go on a ML350 CDI, which is not only almost as quick in-gear but will be far cheaper to buy and run, too.

If you’re after Porsche 911-rivalling acceleration, with a bit of off-road ability and SUV practicality, then the choice available is surprisingly broad. There’s the Porsche Cayenne Turbo, BMW X5M and Jeep Grand Cherokee SRT8 to consider - and now the Mercedes ML63 AMG has joined the pack, too.

It’s the ultimate version of the M-Class, powered by AMG’s new 5.5-litre twin-turbo V8, which produces 518bhp (549bhp with the optional performance pack) and it feels every bit the performance flagship. Ferocious acceleration off the line launches the ML63 from 0-62mph in just 4.8 seconds and on to a top speed of 155mph.

Unfortunately the seven-speed automatic gearbox is occasionally slow to react, especially when changing down through multiple gears.

An AMG model needs a few visual tweaks and if you thought the deeper front bumper, larger alloys and more aggressive bodykit were subtle enough to let you slip by unnoticed, the roar from the AMG exhausts will soon put an end to that. Floor the throttle and the volume is turned up to anti-social levels.

The air suspension can be switched between Comfort, Sport and Sport+ modes, robbing the ML of a bit of comfort but improving the handling slightly with each step. In Sport+ mode there’s little body roll and huge amounts of grip, but the ML still feels like a large vehicle. The steering is simply too vague and uncommunicative to ever let you feel truly comfortable at high speeds.

As it stands the standard ML is just about as much fun as the ML63 AMG in the corners and if you opt for the V6 diesel-powered ML350, there’s even a similar amount of mid-range punch.

Going the diesel route would save you a fair bit of fuel money, too, as the ML63’s official fuel economy figure of 23.9mpg is optimistic to say the least. Plus, CO2 emissions of 276g/km will mean a £1,030 road tax bill in the first year.

But then those who can afford £82,995 won’t be too concerned about fuel bills. They may however be concerned about driving thrills and comfort, and the ML63 AMG doesn’t top the class in either.