We drive the most powerful Mercedes M-Class ever – the new flagship super SUV, the ML63 AMG 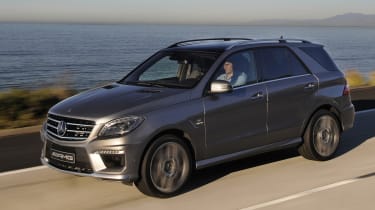 Mercedes pretty much invented the super-SUV sector when it launched the ML55 AMG back in 1999, and it’s been surprisingly popular with 24,000 models sold worldwide since. The latest version proves that AMG has something of a conscience – this flagship is 30 perc ent more efficient. But that’s not what it’s really about. Like all AMG models, it has storming straight-line performance and it's impressive around corners too. Only the hesitant automatic transmission holds it back. But at £85,000, the ML63 AMG is £10,000 more than the E63 AMG Estate – a car that's even more spacious and even better to drive.

The Mercedes ML63 AMG is the ultimate ML – a twin-turbocharged V8-engined four-wheel drive super-SUV that can also hold its own in the rough stuff. And Auto Express has driven it.
Mercedes made big noises at the launch of the ML last year about how its third-generation BMW X5 rival was much more efficient and economical than its predecessor. But while the new flagship ML63 AMG gets a slightly smaller engine, there’s no way you could ever call this Cayenne Turbo competitor ‘environmentally friendly’. Or cheap – it has a projected price tag of around £85,000.

Still, it is a lot of fun. Out goes the old 6.2-litre normally aspirated V8 and in comes AMG’s new 5.5-litre twin-turbo, which is available in two forms – standard, which produces 518bhp and 700Nm of torque or you can add the optional £6,000 Performance Pack, which takes peak power to 549bhp while torque jumps to 760Nm.
As you might expect, even the 518bhp car is very fast indeed. It can do 0-62mph in 4.8 seconds (the Performance pack takes a tenth off that) and both models have an electronically limited top speed of 155mph. You can even specify the Driver's Pack, which removes the limter and takes the top speed to 174mph.
As with any AMG product, the engine certainly dominates the driving experience. It makes a great noise – it has a bassy V8 rumble which grows to a roar as you reach the redline, and is backed up by some pops and bangs from the quad chrome-tipped exhaust pipes when you lift off. From a standing start, the ML shrugs off its 2,345kg weight remarkably easily and with four-wheel drive, not a single brake horsepower is wasted.
Once rolling, the ML63 AMG really gets into its stride, and with 700Nm of torque on offer (760Nm with the Performance pack) in-gear acceleration is about as fast as most supercars.
With such huge reserves of torque, you don’t really need seven gears, but the 7G-tronic transmission has a decent spread of ratios. It's frustrating when you're on a twisty road though – arrive at a hairpin bend and demand several downchanges from the left paddle and there's an annoying delay between shifts.
But with a long top gear and stop-start, the ML63 AMG is reasonably economical for such a heavy and powerful car. Mercedes quotes 23.9mpg, while CO2 emissions are 276g/km.
With Airmatic air-suspension, active anti-roll bars and selectable modes for the adaptive dampers, the ML63 AMG can switch from comfortable luxury car to sporty saloon. In the firmest settings, it barely rolls around corners, while there’s plenty of grip provided by the 265/45 section tyres. It rides comfortably too, softening out bumps very well indeed.
The old ML63 AMG wasn’t very precise to drive, but thanks to a 40:60 torque split in favour of the rear wheels and a new steering system, the AMG version feels much more agile and responsive.
You’re always aware that you’re driving something bigger and heavier than the average sports saloon though (the ML63 AMG weighs 175kg more than a Porsche Cayenne Turbo), but with 390mm brake discs at the front and 345mm at the rear, it always feels like it has the chassis and braking performance to match its enormous power.
The ML63 AMG looks the part inside, with comfortable leather sports seats, aluminium trim for the pedals and AMG badging. It’s also absolutely brimming with equipment, including a colour touchscreen, sat-nav and Bluetooth, as well as more safety kit than any SUV in the class. The exterior is certainly muscular, boasting 20-inch alloy wheels (21-inch wheels are optional), side skirts, lower front aprons and even larger air intakes.
It's not what you’d call handsome, but it's not as aggressive as a BMW X5M or a Porsche Cayenne Turbo – this is one 518bhp mega SUV in which you travel reasonably incognito. The ML63 has been downsized and made more economical, but it’s still a true monster Mercedes.
Share this on TwitterShare this on FacebookEmail