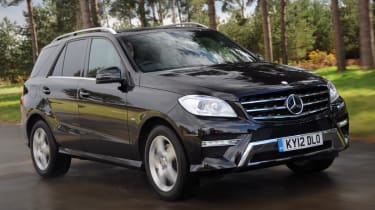 The M-Class is still a practical, luxurious and comfortable SUV. The new model’s revised V6 diesel brings improved fuel economy and performance. While the Porsche Cayenne and BMW X5 are sportier to drive, the M-Class strikes a satisfying balance between comfort and dynamics. If you want even lower fuel bills, go for the four-cylinder ML 250.

It’s been a long time since Mercedes built a genuinely class-leading SUV – but that could be about to change with the arrival of the new M-Class. Its refinement and off-road ability impressed us in Europe, but how will the car fare on tougher UK roads?
Outside, it looks imposing, with an AMG styling pack that includes side skirts and 19-inch alloys as standard. It’s also longer and wider than before, so it matches rivals such as the BMW X5 and Porsche Cayenne for road presence.
In addition, the luxurious interior feels much smarter and better built than the outgoing model’s. A long list of standard equipment includes climate control, sat-nav and durable artificial leather upholstery.
The efficient new four-cylinder ML 250 grabbed the headlines at the launch, but the majority of UK cars will still be powered by this revised 3.0-litre V6 diesel engine.

Push the accelerator and it’s easy to see why: with 255bhp and a whopping 620Nm of torque on tap, the ML 350 provides truly effortless performance in any of its seven gears. It shrugs off its two-tonne bulk and sprints from 0-62mph in only 7.4 seconds, yet it also claims nearly 40mpg and emits 189g/km of CO2 – big improvements over the old car’s 32.5mpg and 230g/km.
As you’d expect from a Mercedes, the M-Class is also superbly quiet and refined. The ride is smooth, even on those sporty 19-inch alloys, while the engine makes only a muted roar under acceleration and fades into the background when cruising on the motorway. The M-Class is a great long-distance car.
Around corners, it’s also more agile than the old version, thanks to a more precise steering system. Although it doesn’t have the pin-sharp dynamics of a Cayenne or X5, it’s a more comfortable choice than either of those.
The M-Class doesn’t have seven seats like a Land Rover Discovery, but there’s room for five adults and plenty of luggage, too. You can fold the seats flat for a maximum 2,010 litres of storage room, which is pretty impressive.
Factor in the big range of off-road gadgets, such as the clever hill-descent system, and you have a great all-rounder.
Share this on TwitterShare this on FacebookEmail