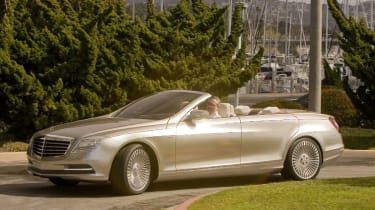 The Ocean Drive looks as if it’s a car that could go into production tomorrow. It has few outlandish concept features inside or out, and it would pose a strong challenge to luxury drop-top rivals from Bentley and Rolls-Royce. What’s more, Mercedes has a history of making this kind of bespoke car – the historical forerunner to the latest concept is the 300d Cabriolet, which was built to order up until 1962.

Forget about the incredible looks, luxurious interior and potent powerplant... The most amazing thing about this drop-top Mercedes S-Class is that it’s a car you could see on a street near you sooner than you think.

To prove the point, Auto Express was invited to be first behind the wheel of the fabric-roofed cabriolet at an exclusive event in the US.

The car was unveiled as a concept called Ocean Drive at January’s Detroit Motor Show, but nearly all of its features are entirely feasible for production. It sits on the long-wheelbase platform of the S600 limousine, and the four-seater four-door cabrio has a prominent upright grille that’s even larger than the one which adorns the front of the S-Class.

The LED-equipped headlamps that frame it are more angular than those on the saloon, and illuminate in a distinctive ‘C’ shape – exactly mimick-ing those at the rear. All four doors open via flush-fitting chrome handles that spring out from the bodywork with the press of a fingertip.

Subtle creases and lines trace both front and rear arches to frame the specially produced 36-spoke, 21-inch alloy wheels perfectly. And they look simply dazzling in bright sunshine. Open the driver’s door and climb inside, and the chair automatically moves back and lowers to provide easier access. Once you’re in place, the memory function returns the seat to your ideal setting.

Firing up the twin-turbocharged V12 engine reveals the same bassy thrum that top-end Mercedes owners will be familiar with from the S600 and CL600. Although the powerplant clearly means business, for the purposes of our drive, only low-speed cruising was permitted, as the one-off concept is not fitted with Merc’s hi-tech air-suspension system.

On the move, though, the Ocean Drive feels majestic. Despite the lack of the cushioned damping system, the vast limousine soaks up bumps with ease. And once the roof is down, it serves up an amazing experience, as the lazy soundtrack of the big V12 fills the cabin. The challenge for a production version would be maintaining body rigidity with the four-door layout.

As you might expect, the model oozes luxury inside. The dashboard’s shape and switchgear are mostly borrowed from the S-Class, but the Ocean Drive’s finish is a cut above. Soft cream leather and bespoke Italian woven fabric are used to cover everything, from the one-off wooden steering wheel to the seats, lower doors and top of the dash.

Arguably the biggest wow factor of all is reserved for rear passengers, though. At the touch of a button, the centre armrest folds out between the two rear seats. Press another on the end of the armrest, and a cover drops down to reveal a pair of champagne flutes and a mini bottle of bubbly sliding out on a horizontal tray, ready to toast your fine vehicle choice.

Opening and closing the hood takes a swift 20 seconds in either direction. And occupants will feel supremely comfortable in either mode – due in part to Mercedes’ Airscarf heating system, which wafts hot air on to their necks by way of small vents in the headrests. All of this adds up to a very special car. If Mercedes does decide to make it, we’re sure that there will be plenty of rich attention seekers who will want to be seen cruising along Miami’s Ocean Drive and other playboy hotspots around the world in this luxury drop-top.