I'm leaving Auto Express, and besides the camaraderie and thrill of working on a weekly car magazine, the thing I am going to miss most is our long-term Mercedes S320 CDI. It may have only arrived seven months ago, but I formed an instant rapport with KS53 FNR, and so far it has clocked up more than 8,000 enjoyable miles. 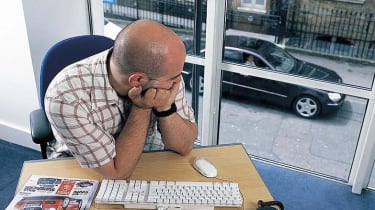 I'm leaving Auto Express, and besides the camaraderie and thrill of working on a weekly car magazine, the thing I am going to miss most is our long-term Mercedes S320 CDI. It may have only arrived seven months ago, but I formed an instant rapport with KS53 FNR, and so far it has clocked up more than 8,000 enjoyable miles. As with all the best relationships, though, the path hasn't always run smoothly. The most irritating fault has concerned the COMAND system, which incorporates the stereo, satellite-navigation and trip computer. Occasionally, it would not emit any sound at all, and on one morning the unit decided to blast the interior with tortuous 'white noise' crackling at an incredibly high volume. Only hitting the stereo's mute button got rid of it. As the problem was beginning to occur nearly every day, I prepared to book the car in to a main dealer to be looked at - but then, as these things have a habit of doing, it miraculously cured itself. In the past couple of months, the fault has returned only once. But the stereo isn't the only part of the Merc that hasn't stood up to the rigours of daily life. Because I've been scrupulous with the S-Class, it has never passed through a mechanical car wash in its life. However, I do make sure I clean it most weekends using a high-pressure jet washer. And after one scrubbing, I noticed that the lacquer was flaking off one of the hugely expensive AMG alloys (£2,030 for four) - more disappears every time the car is washed. The main trouble with the S-Class, though, is that she's now quite an old girl. A recent group test highlighted how rivals have surpassed the big Merc in some crucial areas. The boot, for example, is way too shallow when compared to that of the smaller E-Class, and the back seats don't fold down, either. This is all due to the vast fuel tank occupying the space in between, so large loads have to go on the back seat or not at all. But the S-Class is more about keeping occupants satisfied, rather than luggage. I never had much chance to sample life in the back, but passengers are never anything but totally satisfied. We specified the £1,240 rear TV screen, which has kept young and old alike quiet. In fact, such is the silence and refinement on offer in this car, it's not surprising to glance round and see occupants sitting in the back catching a quick 40 winks. This is helped by the engine, which is impressively quiet in most instances. Yet while Mercedes was first on the scene with a luxury diesel model in this country, others have since followed. Our road testers recently completed a mammoth journey to John O'Groats at the wheel of an Audi A8 3.0 TDI - and they were raving about it. What's more, having experienced that car myself, I have to say I agree with their verdict. The Audi's interior design knocks the now-dated Mercedes cabin into a cocked hat thanks to its fantastic layout, while the engine is even more hushed. That said, we're in agreement that the S-Class still has the edge when it comes to ride comfort. The air-suspension is simply amazing, although for the ultimate in smoothness, I would recommend you stick to the smaller standard wheels rather than our 18-inch alloys, which introduce some unwanted disturbances into the cabin. This doesn't affect things too much on motorways, but in town you notice the extra harshness - and because my daily commute takes me on a lot of urban roads, this has proved a real source of irritation. However, even with all this city driving, I still can't find much to complain about on the fuel economy front - in fact, the S-Class has got better since our last report (Issue 793), regularly topping 28mpg. Also, the Merc probably won't need to see the inside of a dealership for a check-up until it's a year old, thanks to its variable servicing intervals. Sadly, I won't be around to see how it fares, but we'll keep you informed of its progress.