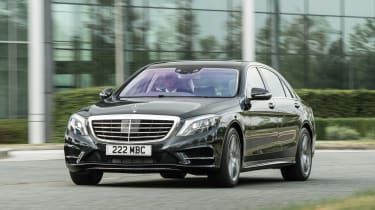 The way this Mercedes S500 AMG line harnesses the latest technology while retaining the hallmarks of a luxury car is remarkable. And the way the S-Class lowers your blood pressure as soon as you climb in is unique. If you do fancy pushing on, body control is excellent, and it feels bonkers quick from behind the wheel for a two-tonne car. Who on earth needs to spend £31,435 more on the S63 AMG?

We've already named the new S-Class as our luxury car champion – it just pipped the Range Rover in an epic group test in October. Back then, we were driving the S350 BlueTEC diesel (expected to be the overwhelming best seller), but now it’s time to see how well the V8-powered Mercedes S500 acquits itself on British roads.

A faster, more expensive S-Class is available in the form of the £119,565 S63 AMG, although in the standard S-Class line-up the S500 is king. There’s more to its range-topping status than replacing the S350’s V6 diesel with a 449bhp twin-turbo V8, too. In the UK, the S500 is only available with an extended wheelbase. This boosts rear legroom significantly and boot space by 20 litres to 530 litres. It’s also the only model with the option of the £4,340 Magic Body Control suspension.

S-Classes have always brought pioneering new technology to the market. In the past, anti-lock brakes and catalytic converters were all seen first on an S-Class, and Magic Body Control is this generation’s party piece. By scanning the road up to 15 metres ahead using a camera at the top of the windscreen, it can prepare the air-suspension to suit the upcoming road surface.

For the most part you don’t notice the system working its magic – it isolates you from the road just as well as its predecessor. Cruise over a speed bump, though, and it feels like witchcraft: there’s a noise as the tyres hit the bump, but no discernible vertical movement.

The combination of the brilliant ride quality, virtually zero road noise and silky smooth engine and gearbox combination makes the S500 an incredibly relaxing way to travel – whether in the back as a passenger or from the driving seat. There’s not much feel through the steering wheel or brake pedal, but an S-Class is about detaching you from the outside world – and in that respect it’s a masterpiece.