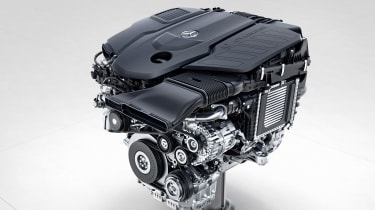 A facelifted version of the Mercedes S-Class will arrive next summer - and it will usher in a fresh range of all-new engines that will eventually filter through much of the German manufacturer’s line-up.

The luxury saloon is destined to get only mild styling tweaks but a host of improvements under the skin including, crucially, an upgrade to a 48-volt electrics system. This, in turn, will allow the S-Class to access Merc’s newly developed engines, many of which make use of the extra voltage to power ancillaries such as the water pump, climate control and even a starter-generator.

Two of the S-Class’s key engines will be new petrol motors - a twin-turbocharged 4.0-litre V8 that’s closely linked to the unit that features in the latest Mercedes-AMG E 63 super saloon, and an all-new in-line twin-turbo six-cylinder motor. The second of those engines, which is called M 256 and is due a few months after the S-Class’s debut next June, takes full advantage of 48V electrics to power a 20bhp integrated starter alternator along with the water pump and climate control system. 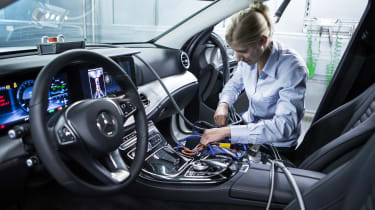 Mercedes says it will offer more than 402bhp and 500Nm of torque - figures that match the current V8 engine - but emit 15 per cent less CO2 than the old V6.

There’s also an all-new 2.0-litre four-cylinder turbocharged petrol engine that’s capable of producing 134bhp per litre. Called M 264, it also uses 48-volt technology to power its water pump and a belt-driven starter alternator that is said to quicken start-up and make it smooth enough for the car to be able to turn its engine off when it is coasting along, not just when it comes to a halt in traffic or at junctions.

The S-Class is also likely to get Mercedes’ most powerful diesel engine to date - a straight-six unit called OM 656 that produces 308bhp (a gain of 53bhp over the existing V6 diesel) but is said to use seven per cent less fuel.

Officials also suggested that the new 2.0-litre four-cylinder diesel that’s already appeared in the latest E-Class and C-Class is likely to get a more powerful twin-turbocharged variant. This could be badged 250 CDI and make it into the S-Class - although Mercedes has a history of restricting UK versions of that car to six- and eight-cylinder engines.

Read our latest review of the Mercedes C-Class here... 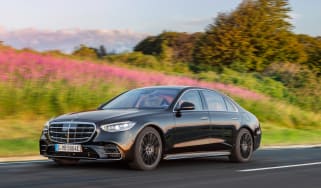