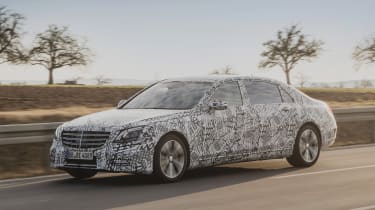 The passenger seat isn’t usually the best place for first impressions, but as the car here is Mercedes-Benz’s new S-Class we’ll make an exception. Not that the driver is doing much of the driving, the new S-Class, which will be revealed fully within the next month, is pretty much driving itself. Outwardly, even under the swirled camouflage, it’s clear that Mercedes’s biggest saloon won’t be a radical departure in looks from the existing car. No, the changes to the firm’s technology leader relate to exactly that - technology, and specifically, the driver assistance systems.

The E-Class introduced many of them, with the current S-Class actually trailing its smaller relation in regards to Mercedes’s most advanced assistance and autonomous driving features. That changes soon. The E-Class runs the company’s 4.0 generation equipment, however the new S-Class will have 4.5, which adds some new advanced features to some of the familiar technology that debuted on the E-Class. 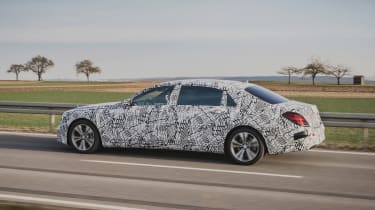 The S-Class gains the E’s new electronic architecture underneath, which will allow the S-Class to adopt Mercedes's latest modular engine family. That includes the M 256 six-cylinder in-line petrol which adopts an electric compressor and Integrated Starter-Alternator; allowing it V8 power but sub six-cylinder consumption. There will be a 4.0-litre V8 biturbo, too, while the S-Class will now be available with the E-Class’s sophisticated turbodiesel four- and six-cylinder units, engines which simply wouldn’t have been possible with the S-Class’s old electronic systems.

Today isn’t about the powertrains, though, it’s about the assistance and autonomous systems. The S-Class builds on the foundations of the E-Class before it, re-establishing the S-Class as the brand's technology leader. The words Active and Assist feature a lot, Mercedes’s descriptions of its technology never anything but literal, with the list including Active Distance Assist Distronic, Active Speed Limit Assist, Active Steering Assist, Evasive Steering Assist, Active Lane Change Assist, Active Emergency Stop Assist and Active and Remote Parking Assist. 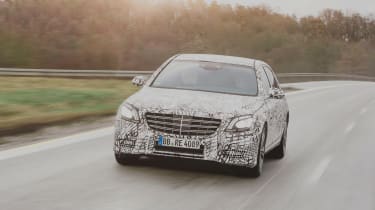 While all of Mercedes’s experts shy away from talk of full autonomy, Dr Michael Hafner, Head of Automated Driving and Active Safety says Mercedes is approaching the goal of dispensing of a driver faster than people suspect - pointing to the 2013 trip between Mannheim and Pfrozheim in a fully autonomous S 500 Intelligent Drive. He adds that it’s legislative as much as technical hurdles that must first be resolved. He does say though, “from the autumn, the new S-Class will be able to support its driver considerably better than all the systems which have been available to date.”

That’s achieved thanks to new technology and hardware, with greater range from the cameras and radar systems up to 250 metres ahead, improved processing power and, inside, simpler graphical representation in the instruments as to the automated systems functions, and improved operation of them. The Lane Change Assist now functions on just a touch of the indicator. However, underlining those beaurocratic hurdles Hafner highlighted, is the fact that Lane Change Assist isn’t allowed in the UK under current legislation.

Today our driver is Volker Klink, of the Active Safety, Driver Assistance Systems team. To say he’s driving is a bit of a misnomer, he’s basically steering, Klink’s foot only touching the brake a couple of times over a 50km driving route around Mercedes's Sindelfingen facility.

Even the steering inputs are assisted, the S-Class’s new technology following navigation information and predicatively reducing speeds when approaching bends, junctions or roundabouts. The automated braking and acceleration is associated with the driving mode selected, whether it be Eco, Comfort or Sport. It’s noticeably later in its braking and more forceful in its acceleration - up to the pre-selected, or traffic sign read speed, of course, when in Sport mode. Of course, Klink needs to hold onto the wheel, not doing so sees the S-Class repeatedly warn you before deciding you’re incapacitated and stopping using Active Emergency Stop Assist, unlocking the doors and calling the emergency services. 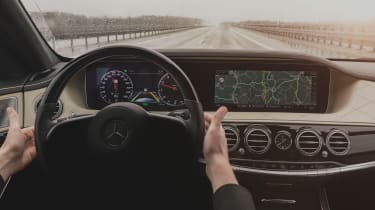 It’s unlikely you would be driving the Maybach S-Class we’re sat in, the systems making life a bit easier for your chauffeur. You might, however, want to show off the Remote Parking Assistant to your friends yourself. Working via your smartphone it’ll squeeze the S-Class completely autonomously into a parking space. All you have to do is stand alongside and twirl your thumb on your phone’s screen to let the car know you’re paying attention. Do that and the S-Class will manoeuvre into a space, or out of it, like the biggest, most expensive remote control car you’ve ever seen. It’s fun, too, and the most truly autonomous feature on the new car.

The world’s chauffeurs can rest easy for now then, though by the time this new S-Class’s replacement comes along they might want to consider a career change, as the technology is advancing at a tremendous rate, and if the legislation catches up, a driverless S-Class isn’t too far away at all.