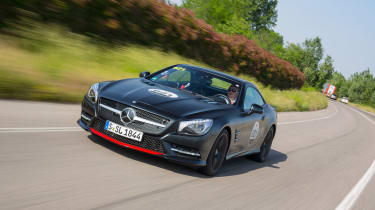 Trim changes rather than any actual technical enhancements make this a special edition for those wanting exclusivity instead of extra performance. We’ll let you decide whether the red and black colour scheme is to your taste, but the SL’s strength is the effortless wayit manages to blend complete comfort with a startling turn of pace. However you can’t overlook the fact that it costs £12,000 more than the standard SL.

With the Mercedes AMG GT stealing all the headlines of late, Mercedes’ glamorous SL drop-top has been ignored somewhat. So the company has addressed this by rummaging through its history and introducing a new special edition, called the Mille Miglia 417.

Sir Stirling Moss usually gets all the Mille Miglia glory, but Fitch’s 11-hour, 29-minute and 21-second time – which placed him fifth in the 1,000-mile event in 1955 – is well worth celebrating, too. 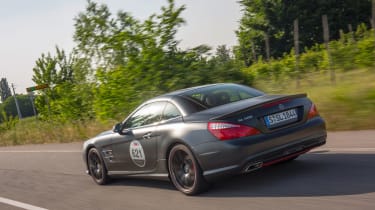 Numbers aside, Fitch would barely recognise the SL as related to his own fifties 300 SL, with the folding hard-top roadster offered in SL400 and SL500 guises with417 treatment. The 448bhp from the 500’s 4.7-litre turbocharged engine allows a 0-62mph time of 4.6 seconds and an electronically limited 155mph top speed.

The Mille Miglia rides on 19-inch front and 20-inch rear AMG Performance alloys, finished in black, and their red surrounds demonstrate the car’s styling direction. Red highlights the lower front bumper and under the rear bumper between the tailpipes, as well as the brake calipers.

There’s a matt-black carbon fibre bootlid spoiler, while red and black Mille Miglia 417 badging sits behind the front wing vents.Inside, the theme continues, with red leather holds on the steering wheel, plus a carbon weave effect throughout the cabin. The AMG Line seats, again in red and black, feature special-edition embroidery, while the 1000 Miglia logo adorns the floor mats.

Only 500 of these special SLs will be made, with magnetite black metallic paintwork as standard. Matt designo black magno or cashmere white magno finishes are offered, as is an optional desgino diamond white non-matt finish. 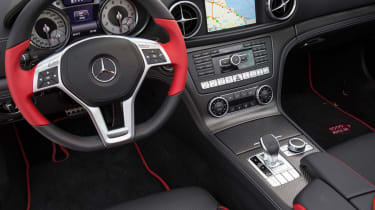 Performance and driving dynamics remain unchanged over the standard SL’s, which sees it sit comfortably in its own segment, bridging the divide between more sporting rivals such as Porsche’s 911 Carbiolet and BMW’s 6 Series. That has long been part of the SL’s appeal – it’s the perfect companion for the varied demands of a 1,000-mile Italian drive. 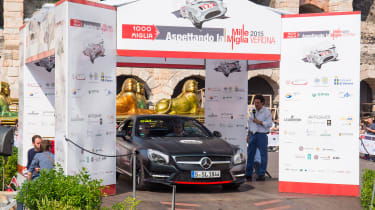 The seven-speed auto is smooth, if not that quick to react, but the engine’s plentiful urge means the SL is an easy and very swift choice. Its steering might not offer the clarity and precision of its more sporting rivals, and the suspension doesn’t have the same control, but the more comfortable ride makes it a very accomplished grand tourer.

Still, that’s true of all SLs, so you’d have to really love the black and red theme to pay £12,000 extra for it. If you do, though, make sure you head to Italy to pay homage to a fine driver.