We review new MG3 supermini, a Ford Fiesta rival with smart looks and a low price 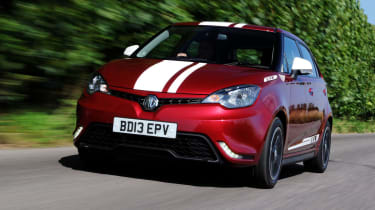 The MG3 could really help the revived brand to get back on its feet. It has lots of charm, a very low price and a level of customisation that you just don’t get with many of its rivals. There are some notable flaws, such as the old-fashioned engine and poor cabin quality, but they only seem significant when you compare this MG to cars that are thousands of pounds more expensive.

THE MG6 was supposed to signal the brand’s return to the UK, but it’s fair to say that car hasn’t quite had the desired effect. So now we have the MG3: a Ford Fiesta rival the company hopes will kick-start its fortunes.

The most striking thing about the new car is its low price. We drove the top-of-the-range Style model, which comes in at less than £10,000. For that money, you get Bluetooth connectivity, air-conditioning, a DAB radio, 16-inch alloy wheels and cruise control all fitted as standard.

A Fiesta or Skoda Fabia kitted out with that much equipment would cost nearly £13,000. But price isn’t everything: the MG3 has to deliver on the road. And in some key respects, it does.

The car feels quite sporty, with an impressive amount of grip that allows you to tackle twisty back roads with confidence.

But it’s not all good news. The steering is inconsistent and you can’t rely on its responses to the same extent you can in a Fiesta. It’s also a bit too heavy at low speeds, which, combined with choppy low-speed ride quality, makes city-centre driving a chore.

Only one engine is currently available for the MG3: a 1.5-litre naturally aspirated petrol that produces 105bhp. It feels a little old-fashioned, and without the turbocharged hit you get from a Ford EcoBoost or VW Group TSI engine, it also seems a lot slower than its 10.9-second 0-62mph time suggests. We’ve been told there’s a range of small-capacity turbocharged petrols on the way, as well as a diesel – and they really can’t come soon enough.

On the plus side, the back seats are extremely spacious. There’s a nice high roofline and plenty of kneeroom, allowing the tallest adults to fit comfortably.

The boot will hold 285 litres of luggage with the rear seats in place, which is about the norm for this class, and it’s also nicely shaped for easy loading.

Cabin quality leaves a lot to be desired, though, with hard, scratchy plastics and some outdated switchgear. The steering wheel buttons are particularly poor, and none of the controls offers the kind of solid, high-quality feeling you get in a Fiesta, Fabia or VW Polo interior.

The 3 scores well in other areas, such as exterior styling. Simple, clean lines are matched up with LED running lights on all models, while our car had eye-catching decals. Plus, the wide range of customisation options means MG3 buyers can enjoy the MINI experience at a fraction of the cost.

So this car will make a lot of sense for young, first-time buyers. It sits in insurance group 4E, will cost less than £10,000 (unless you go crazy with options) and you can really make it stand out from the crowd. Although it’s not perfect, there’s no reason why the MG3 won’t succeed.