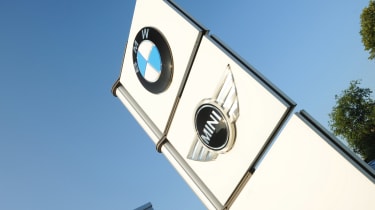 MINI is set to axe its slow-selling Coupe and Roadster and replace them with a more aggressive standalone sports car that will take on the popular Mazda MX-5.

MINI has plans for an onslaught of new models over the next six years, and sources say the new sports car – which will sit on the next MINI’s front-wheel-drive architecture – will be offered as a soft-top (shown in our images) and a hard-top.

Plus, unlike the current Roadster and Coupe, the new, sleeker sports cars will share virtually no body panels with the rest of the MINI line-up. However, the 2015 MINI will retain key styling cues from the rest of the new range, including round headlights with LED rings, larger tail-lamps and muscular curves along the sides.

As with the rest of the MINI range, new 1.5-litre, three-cylinder petrol and diesel engines will be offered on entry-level models. However, it’s the range-topping Cooper S and JCW versions, powered by a new 2.0-litre turbo engine, that performance fans will prefer. BMW’s new modular engine family is said to be capable of producing between 40bhp and 74bhp per cylinder for the petrol engines, and between 26bhp and 60bhp for the diesels. Expect the sports car to produce around 220bhp in JCW tune.

Mechanically, the 2015 MINI sports car will be largely similar to the new MINI hatch, running on the same new UKL1 front-wheel-drive platform and with similar suspension, steering and gearboxes, although all models will be tuned to deliver sharper reactions.

The new car spells the end for the Coupe and Roadster, which were pushed into production by the BMW and MINI design departments, rather than product planning, and failed to achieve even the modest targets set for them.

Even though BMW sources say they are happy with the 15-20 per cent of the market each car has achieved in its class, those markets didn’t grow enough to sell more than 15,000 of the Roadsters and Coupés globally, and just over 2,000 a year in the UK (see panel, right).

A source told Auto Express: “If we are only going to sell 15,000 a year of a certain model, we should make more of an effort to ensure it jumps off the road as something different, but still identifiably a MINI.”

However, despite stiff competition from Alfa Romeo, BMW and Mazda, the new MX-5 rival will have to wait until more important versions of the next MINI have been rolled out before it enters production.

These will be led by the three-door hatchback, which will debut at the LA and Tokyo Motor Shows in November with three and four-cylinder turbo engines and diesel or petrol power.

Only Cooper S, JCW and SD cars will use four-cylinder engines, though; the rest of the range will downsize to three cylinders. MINI will follow the hatch with a five-door model – expected to be the most popular car in the range – at the Paris Motor Show in September 2014.

The five-door MINI Clubman will follow that in time for the 2015 Geneva Motor Show – this time without the controversial rear-facing ‘Clubdoor’ – while the four-seat Convertible is due to be unveiled later in 2015.

There’s no date for the Paceman and Countryman replacements, although the current cars are likely to last for seven-year lifecycles – suggesting 2019 and 2017 respectively.

An MPV will also join the two SUV MINIs, with all three larger cars sitting on a stretched version of the front-wheel-drive platform.