New ‘six-door’ MINI Clubman is more practical than ever – so can it beat conventional hatches from VW and Volvo? 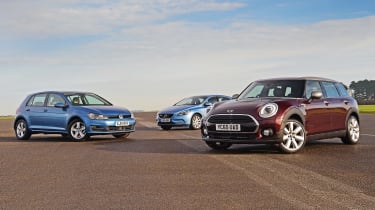 It’s fair to say that BMW-owned MINI has ignored the conventional class sectors when it’s launched new models. The standard hatch has grown in size over the years, but the British brand has offered different bodystyles for buyers looking for yet more practicality.

Take the Clubman, for example. The original model added a longer tail, double rear doors and a second half door on one side, so it had some quirky charm to go with its extra versatility. Now, the second-generation version is based on the five-door hatch, and is technically a six-door model. With such an unconventional layout, the Clubman maintains the tradition of fitting outside class boundaries, but that hasn’t stopped us finding two rivals for its first test.

The VW Golf is pretty sensible in comparison, but it has similar boot space, while the 2.0 TDI diesel offers the same power as the Cooper D. Our second competitor is the Volvo V40. This is another hatch that is led by design, while again diesel power brings decent efficiency. Can the Clubman serve up a better mix of style, practicality and efficiency than either rival? 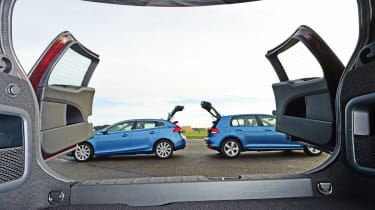 The Clubman’s double rear doors can be hard to open in tight spots. What’s more, the extended roofline means you have to stoop slightly to reach in, and you could bang your head if you’re not careful. Still, back seat access is good; the MINI has longer doors than the hatchback, so accessis just as easy as in the Golf.

There’s a raft of options on the Clubman, including a variety of wheel designs, contrast roof colours and interior upgrades. Our car’s illuminated door trims add colour to the cabin at night. There are fewer options on the VW and Volvo, although the latter does have a range of alloys. 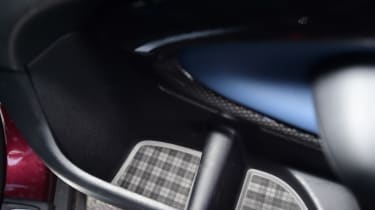 The MINI and VW are more expensive to run as company cars than the Volvo. Its 99g/km emissions mean higher-rate taxpayers will face an annual Benefit In Kind bill of £1,623; the Clubman costs £1,688 a year and the Golf £1,776. 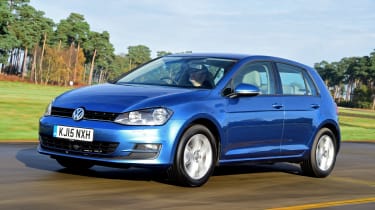 In some ways it’s a sensible choice, but the Golf’s depth of talent is something these two rivals struggle to match. The 2.0 TDI is an excellent performer, with a great mix of power and economy, while the chassis delivers a combination of sharp handling and cruising comfort that makes it hard to beat. The new Match Edition adds great value for money to the mix, too. 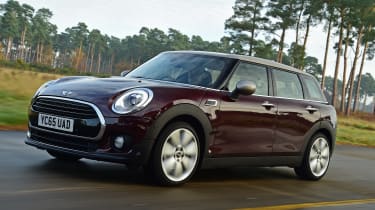 There’s no denying that the Clubman is the most practical new-generation MINI, thanks to its bigger boot and rear space, but it’s not without its flaws. The looks are more awkward than ever, while the double back doors are more a talking point than useful. Still, if you want to stand out from the crowd, and want an efficient yet sporty-handling family car, it ticks the boxes. 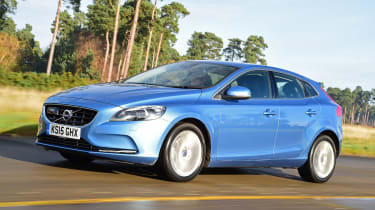 Third place is no slight on the V40, because it still has plenty going for it. The cabin is refreshingly modern, and the low-emission D3 engine makes it an attractive company car. However, it’s not the most spacious choice, and is poorly equipped and expensive to buy. It’s quite relaxing to drive, though, and the raft of safety kit isn’t to be sniffed at.

How can VW win after 'dieselgate'?

With diesels featuring VW's 'defeat device' leaving question marks over emissions tests and news that UK buyers are being denied compensation, can the Golf still claim a road test win? 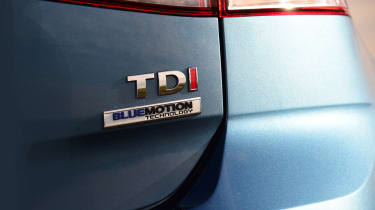 Ignore the brands recent troubles, and the evergreen hatch is still a great car - few family models have such a breadth of talent. More importantly, in a recent German independent study of eight diesels in partnership with UK specialist Emissions Analytics, the latest Euro6 Golf 2.0 TDI was by far the least polluting car. Perhaps there's light at the end of the tunnel for the VW.