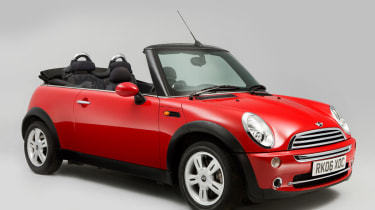 Low demand in winter means now’s the perfect time to buy a cabriolet. The MINI Convertible is usable all year round, and used prices are sure to rise in the spring. A great marketing campaign means the MINI is viewed as chic, desirable and exclusive, plus it’s brilliant to drive. But practicality is also flawed, while the ride is poor and reliability isn’t always great.

More than a decade after it was introduced, the new BMW-built MINI still looks fresh and desirable, and the Convertible version is one of the most stylish soft-tops you can buy for £5,000. Yet while the MkI MINI has a rock-solid reputation, the sheer number of engines, trim levels and special editions makes advice on the best cars worthwhile.

The original MINI hatch debuted in April 2001, but the Convertible didn’t appear until spring 2004. As this was the last of the MINI bodystyles to be launched, it was available immediately with all of the hatch’s petrol engines. That meant there was a 90bhp 1.6-litre (in the One), a 116bhp 1.6-litre (the Cooper) or a 170bhp supercharged 1.6 in the Cooper S Convertible. From January 2005, the latter was also available with a Steptronic CVT box. The quick Cooper S John Cooper Works (JCW) Convertible arrived in October 2005 with a 210bhp 1.6-litre engine. The MkII Convertible arrived in 2009.

The MINI Convertible’s most obvious rival is the Fiat 500C. It starts at £8,000 because the oldest were sold in 2009, but is worth stretching to if you can, as it’s stylish and fun, and no less practical than the MINI.

Coupe-cabrio 2+2 options include the Nissan Micra CC, Mitsubishi Colt CZC and Peugeot 206 or 207 CC, although we’d only really consider the latter.