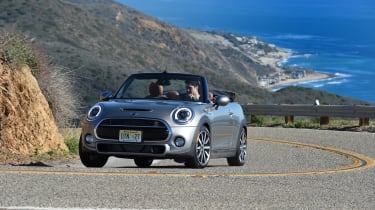 There's a new champion for those who love the cheeky MINI image and want the feel of the wind in their hair. The Convertible is more sophisticated than ever, with high-quality fittings, increased space, a better canvas roof and plenty of on-board technology.  MINI hasn’t forgotten the fun factor, though, and in Cooper S guise, the drop-top is almost as good to drive as the hatchback alternative.

Ever since it relaunched in 2001, the MINI brand has been a runaway success, underpinned by the original three-door hatch. The other variants haven’t notched up quite as many sales, but they’re still an important part of the family.

None more so than the stylish MINI Convertible, the third generation of which comes to the UK this spring – and we’ve driven it, in sporty Cooper S guise.

There’s no mistaking the MINI Convertible for anything else, but lining it up against its predecessors reveals how far the car has come in terms of fit, finish and quality – it has much more of a premium feel than ever before. And, much like the rest of the MINI line-up, the interior is a tactile delight, with a great selection of materials and switchgear.

The circular design theme continues, but now the speedo and rev counter are in front of the driver, which helps make it slightly less distracting. The dashboard is now dedicated to the infotainment screen. 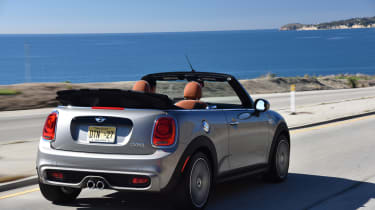 More importantly, the new Convertible is more spacious, thanks to increased exterior dimensions all-round. The net result is a better experience for rear seat passengers – even tall adults will enjoy a fraction more headroom. It’s very blowy back there with the roof down, though. Still, many owners will just use the back seats as extra luggage space, as the boot isn’t huge; it’s 25 per cent bigger than before, and MINI claims it offers 215 litres of space with the roof up or 160 litres when it’s folded down.

The soft-top has been redesigned, too. It takes just 18 seconds to raise or lower, at speeds of up to 18mph (or from the key fob when static, for those who like to showboat). You can also slide the front section back to open the roof without fully retracting the top. 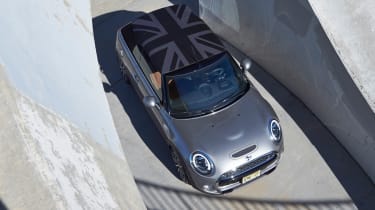 Wind roar over the closed roof isn’t bad at speed, either, and it’s distinctly quiet in operation. As before, however, the folded roof is bulky and doesn’t look particularly tidy, obstructing visibility through the rear-view mirror, although the optional MINI Yours Union Jack woven roof will still be on show even when fully retracted.

At low speeds, it’s fun with the roof down, hearing the exhaust burbling away. Drop the windows and push on a bit, and the meaty turbocharger can be heard, bringing the driver closer to the action. 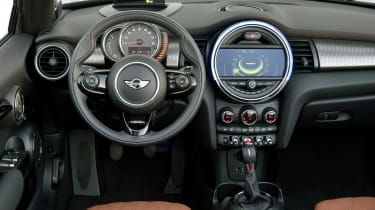 At motorway speeds, the buffeting is acceptable inside, although it would be dramatically improved by a wind deflector.

And in spite of the image that goes with cars like this, the MINI Convertible driving experience is largely similar to that of the hatch. There’s tonnes of grip, plenty of power from the 2.0-litre turbo petrol engine and real adjustment in the chassis. We found little evidence of flex in the body, either, which should bode well for longevity. 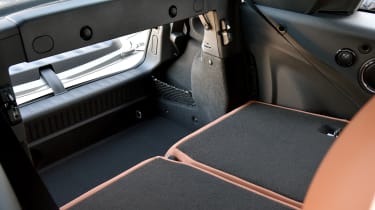 The six-speed manual gearbox is as slick and satisfying as they come, while the automatic comes with or without paddles, appealing to those who spend more time driving in traffic. As in other MINIs, there are three driving modes (Green, Mid and Sport) and this Cooper S is particularly good fun in the Sport setting, which gives a sharper throttle, less assistance for the direct steering, and extra pops and bangs in the exhaust. There’s a rev-matching function for the manual gearbox, making the car more stable when changing down into a corner.