The ASX has struggled to make an impact in the crossover class, and these updates don’t turn it into a contender. It feels like a car that’s past its sell-by date, with an old-school cabin and drive. And while the 1.6-litre diesel is cleaner than the 1.8 it replaces, it’s noisy and suffers vibrations that make the car hard to recommend. There are far better crossover choices.

The crossover market is really crowded, so you could be forgiven for missing the Mitsubishi ASX. It’s been in showrooms since 2010, but low sales volumes mean it’s a pretty rare sight in the UK.

However, Mitsubishi has decided to give the model a bit of a freshen up. The exterior updates are pretty subtle, and include new wheel designs and tweaked lines for the nose and wheelarches, while under the bonnet there’s a new 1.6-litre diesel sourced from PSA Peugeot-Citroen.

The new engine delivers lower emissions and better fuel economy than before, while the ASX range has been rebranded, and now comprises ZC, ZC-M and ZC-H trims. Here we try the mid-spec diesel model. 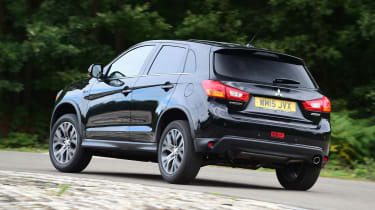 Sadly, first impressions aren’t great. Mitsubishi has done the bare minimum to revise the ASX, and the hard plastics, flimsy switchgear and rattles from behind the dash don’t bode well. There’s competitive cabin space for the class, and you now get a DAB radio, but the dot matrix dash display makes it fiddly to tune – this should be easier in the ZC-H model, which has a touchscreen.

Then there’s the diesel, which is pretty noisy, with a drone that resonates through the cabin when accelerating. It’s linked to a vague six-speed box, although this combination does deliver decent straight-line pace.

In corners, the ASX is pretty stable and body roll is well controlled, but it defaults to understeer in every situation. The firm suspension helps in corners, although the trade-off for this is a rather uncomfortable ride. Bumpy roads send the car bouncing around in every direction, and the ASX doesn’t have the composure of the best crossovers in the class.

At least it’s reasonable value. This mid-spec model gets climate control, keyless go, rear parking sensors, xenon lights and privacy glass, but you have to move up to ZC-H trim if you want leather or sat-nav.