Mitsubishi has joined the battle for crossover supremacy with its new ASX. can it conquer Skoda and Nissan rivals? 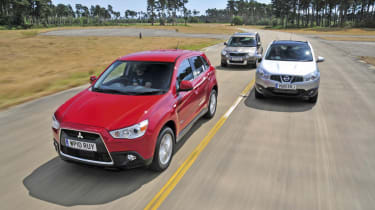 Mitsubishi has a strong SUV pedigree, having unveiled its legendary Shogun off-roader in 1982. However, the firm is a late arrival at the crossover party, so expectations are high for its all-new ASX (Active Sports Crossover) model.

Designed to topple the class leaders, the car breaks new ground for the company. It’s powered by an advanced 1.8-litre diesel with stop-start technology, and promises to mix strong performance with excellent economy. Meanwhile, the bodywork takes cues from the brand’s legendary Evo super-saloon, while the chassis is borrowed from the rugged Outlander 4x4.

On paper, this looks like a recipe for success. The Japanese contender faces some stiff competition, though. First into the ring is the excellent Skoda Yeti.

Our reigning class champion, it blends impressive quality with a great driving experience, flexible interior and distinctive styling. Figure in a range of superb diesel engines, such as the 2.0-litre TDI tested here, and it presents a tough challenge to the ASX.

The car that kickstarted the crossover craze in 2006 is the capable Nissan Qashqai. It recently underwent a facelift, and with a perky 2.0-litre diesel engine, it’s still at the top of its game. So which of our contenders will emerge from this bruising encounter on top?

The ASX is one of the finest Mitsubishis to date. The car scores with its impressive diesel engine, roomy cabin, long spec tally and low running costs.

However, the crossover sector is one of the toughest to crack – and the Japanese model takes the bronze medal in this test.

This has more to do with the excellence of its two rivals than any major failings in the ASX package – overall, there isn’t much to separate our trio.

That’s why we found it so difficult to pick a winner. Even though it’s now nearly four years old, the Qashqai is still a superb choice. The recent facelift has freshened up the looks, while the original car’s great driving dynamics, practicality and strong build quality remain.

But it can’t quite match the Yeti for overall appeal. While we had to sacrifice around 30bhp and a sixth gear ratio to get the Skoda within our budget, it didn’t feel like a poor relation. It features the most comfortable cabin, a widely adaptable seat layout and a massive boot.

Plus, on top of all this, the detailing and interior quality rival models from the class above. So it’s another well deserved victory for the Skoda.