Our very own Lovejoy gives a big thumbs-up to compact SUV! 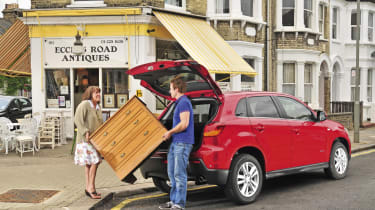 When your mum owns a busy antiques shop, you never know when you’ll be roped in to help out. But since I’ve been put in charge of the newest addition to the Auto Express fleet, my phone has been ringing more than usual…

Although the Mitsubishi ASX is classed as a compact SUV, there’s nothing compact about the space in the back once the rear seats have been folded flat. Maximum capacity is 1,193 litres – so the car not only trumps its Nissan Qashqai rival by 333 litres, but it’s also perfect for a chest of drawers, a set of kitchen chairs or whatever I’ve been collared into carting around that day.

Despite being new to us, the ASX is a late arrival to a market sector that’s been dominated by the Qashqai for the past three years. But only a few weeks after we got the keys, it’s clear that Mitsubishi is on to a winner.

The firm’s policy of plastering the nose of its Evo performance saloon on to everything from the Colt supermini to the Outlander off-roader has received a mixed reaction. Yet to my eyes, the family styling suits the ASX well.

The grille has been stretched to fit the jacked-up stance and, as the car has the shortest overhangs in the class, it adds just the right amount of aggression.

If only the interior was as convincing. I’ve no quibbles with the logical layout and impressive range of adjustability provided by the steering wheel and seats, but the hard plastics that cover the centre console, door handles and lower dash simply aren’t up to scratch.

Our car is decked out in trim level 3 – the lowest spec you can have with diesel power. But this is far from a base model. Heated front seats, cruise control, keyless entry and air-conditioning are all fitted as standard.

My favourite toys include the Bluetooth phone function – it pairs with your mobile with a few simple voice commands – and the ability to hook my iPod up through the USB port hidden away in the armrest. But the narrow, one-line dash display takes some getting used to.

I didn’t expect the 1.8 DiD unit to steal the show, though. It’s the first passenger car diesel engine to feature variable valve timing, and the benefits are there for all to see. The powerplant is hugely flexible, with loads of torque low in the rev range, and provides strong acceleration once the whistling turbocharger is spooled up. It can be noisy at urban speeds, but this is a small price to pay – because the DiD claims impressive combined fuel economy of 51.4mpg. Up to now, we have managed 27mpg exactly, although the car has been town-bound.

So while I haven’t put many miles on the clock yet, early signs are that the ASX will make a fine long-distance, long-term companion...

ASX is a solid effort in the booming crossover class, especially the diesel. Jack likes the striking looks, although they’re sure to divide opinion – my neighbours covered their eyes when I parked it on my drive one evening! It certainly stands out from the crowd.”