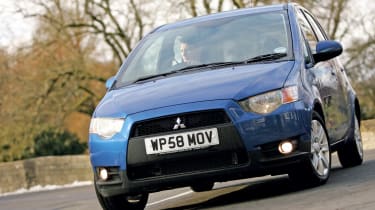 The Colt’s Auto Stop & Go system is smartly executed. It means that the ClearTec is cleaner and more economical than the standard Colt 1.3, yet it offers better performance. There are greener superminis available, such as the oil-burning Ford Fiesta ECOnetic, but the petrol-powered Mitsubishi costs less than its rivals, and it won’t sting you with diesel prices at the pumps, either.

Here’s a car that proves Mitsubishi is capable of building more than rally bred saloons like the Evo X!

The Colt ClearTec is an efficient supermini that’s equipped with ‘Auto Stop & Go’. This monitors seven systems before deciding whether to shut off the engine when you come to a halt.

It checks the engine temperature, battery power, and whether the car is stopped, while the motor is also kept running if you need to demist the windscreen, the electrical load is too high, or the brake pressure too low. Finally, there’s the steering. At a quarter turn of lock and above the engine stays on – the ClearTec figuring you could be at a junction and looking to make a speedy getaway.

Out on the road, the technology works well. The 1.3-litre petrol fires up quickly and on cue. Follow the gearshift indicator, and the Colt is capable of returning 56.5mpg. Push the throttle harder, and the 94bhp engine responds willingly. However, the ride could be smoother.

With prices of £9,299 for the three-door and £9,799 for this five-door, the Colt ClearTec undercuts supermini rivals. However, time will tell if the bargain tag can attract eco-conscious buyers.