Is new Ralliart badged Colt a worthy addition to Mitsubishi's fast car fleet? We hit the road to find out. 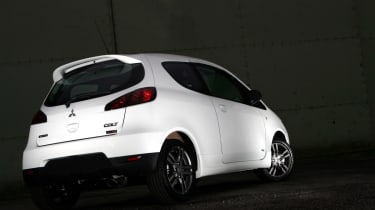 Mitsubishi has upped the Colt’s game with this Ralliart model – the 1.5-litre turbo was always fast, but now it’s got the chassis to match. Composed and capable it gives great value for money. We just wish the interior offered a little more excitement to match.

When it comes to building high performance, turbocharged cars, there's no doubt that Mitsusbishi knows a thing or two...

The Japanese firm's Evos are among the best recognised performance cars on British roads.

That could all be about to change, however, with the launch of an all new model that promises the same legendary turbo performance, packaged in a smaller, more affordable body.

So say hello to the Mitsubishi Colt Ralliart, which packs a 147bhp 1.5-litre engine and costs just £12,049. It may not have the all-wheel drive hardware of its Evo X big brother, but the front-wheel drive Ralliart has inherited the attitude.

The scowling “jet fighter” inspired face is common to all new Colts, but the Ralliart makes it even meaner with sideskirts, rear spoiler and unique dark grey 16-inch alloys. It looks ready for action before you've even inserted the key.

By contrast the interior is disappointing. Aside from different dial facings, aluminium pedals and slightly sportier seats, there's little to distinguish this Colt from its more regular brethren – including the poor quality plastics.

You don't even get a button for the Ralliart's standard fit M-ASTC stability control. Meaning you can't switch the electronic interference off.

No worries on this score. The system seems almost perfectly judged. We only saw the telltale icon flashing occasionally, and its interventions are silky smooth.

In fact, the Ralliart is a B-road blast – well up for chasing down more powerful machinery. The occasional tweak of torquesteer aside, compared to the old Colt CZT it's a revelation.

Both Colts have the same amount of 1.5-litre turbocharged power. But the Ralliart's new low-friction pistons and hollow camshaft (1kg lighter than before) help it sprint 0-62mph in just 7.4 seconds. The CZT made it in 8.0.

Put your foot down, and the Ralliart really flies. Things do get laggy if you let the revs drop below 2,000rpm but keep the Colt on song and 210Nm of torque means plenty of vigour in the mid-range, while the outright power sees it strongly through to the redline.

We're not quite so keen on the steering. It's heavy – especially at low speeds – and lacks feedback. The gearbox needs a sixth gear, too, but it's road noise rather than the engine note that bothers you on the motorway.

The suspension on the other hand dispatches British tarmac with aplomb. It's firm, yes, but capable and absorbent with plenty of grip – never feeling like it's going to bounce you into the scenery.

That’s thanks to the Ralliart’s new spring rates, shock absorbers, revised mountings, bump stops and anti-rollbars. But the entire chassis is stiffer, too, with additional bracing under the bonnet, in the doorframes, and for the transmission tunnel.

And then there is the price... Combined with the Colt's spacious interior – you can even have a five-door version for an extra £500 – the Ralliart represents a well-rounded package.