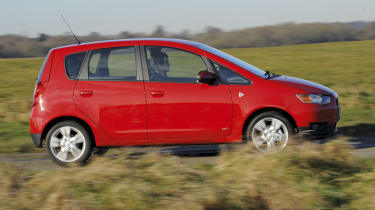 This revised Colt is a big improvement on the previous model. Mitsubishi’s stylists have done a great job integrating the Evo X’s bold nose with the supermini’s shape, and it really stands out as a result. However, the Colt is little fun to drive and doesn’t really trouble the class leaders in any way. On the plus side, though, there’s the appealing price tag, generous equipment levels and low running costs.

Combining the look of a head-turning flagship with an entry-level model is a smart move – take Alfa Romeo’s MiTo, for example. The chic supermini has the stylish nose of the 8C Competizione supercar, but manages to remain a small, affordable package.

Now Mitsubishi is following the same script with its revised Colt. The new model takes its visual inspiration from the rally-bred Lancer Evolution X, so it gets a gaping grille and sharp headlights that certainly mark it out from the crowd. But is it that going to be enough to tempt buyers?

As well as the new front end, the Honda Jazz rival gets an upgraded interior and more standard equipment. Early next year, it will also be available with a stop-start system and regenerative braking. These CO2 reducing measures are being introduced to models across the Mitsubishi range under the Cleartec banner. For now, though, we’ve got our hands on the mid-spec 1.3-litre petrol-engined CZ2.

As well as the Jazz, the Colt will be taking on the Ford Fiesta – a car which has been praised for its stand-out styling. With its Lancer-apeing grille, piercing headlights and revised bumpers, the Colt certainly has more road presence than before.

The changes at the rear are less adventurous, with restyled tail-lights being the biggest revision. A tall roof means the Colt still looks like it could fall into the supermini-MPV category, particularly in five-door form. However, that raised roofline results in some big benefits inside. There’s a surprising amount of  headroom in the back, and tall adults won’t struggle too much for legroom, either. The boot is very small at 186 litres, although the seats split and fold easily to increase carrying capacity.

There’s no reach adjustment for the steering wheel, but the driving position is still comfortable, and while the dashboard won’t set the design world on fire, it’s solidly constructed and neatly styled. Equipment is also impressive: the CZ2 comes with air-con, cruise control and electric windows front and rear, while alloy wheels are standard, too.

Turn the key, and the 94bhp 1.3-litre engine thrums eagerly. It likes to rev and provides brisk performance – 0-60mph takes around 11 seconds. Thanks to long gearing and reasonable refinement, it’s up to motorway cruising as well. Emissions are high at 143g/km, but the Colt still costs £120 a year in road tax, and with combined fuel economy of nearly 50mpg, it won’t cost much at the pumps, either.

It’s shame, then, that the rest of the Colt’s dynamics are less impressive. The steering is light and lacks feedback, while the ride is bouncy and the car feels top-heavy when pushed around corners. What’s more, the clutch, brakes and throttle all have a mushy action, while the gearshift is vague. So while it may look like a junior Evo X, little of that car’s driving DNA has filtered down to the Colt. The thick A-pillars spoil visibility at junctions, too – not great for a car that’s going to spend most of its life in an urban environment.

But with a list price at £9,249, the Colt CZ2 offers decent value for money, and in the current climate, buyers can expect to negotiate a decent discount on that, too.