The Colt CZC offers decent value for money. Its roof is well designed and handling agile, but ride, and material finish let it down. 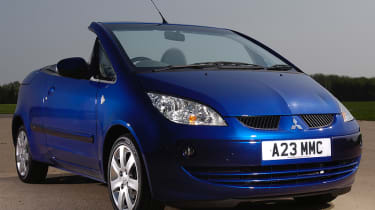 Driving The driving experience is pleasant; as with the standard car, the CZC has a relatively sharp turn-in and accurate handling. Unfortunately, the loss of the roof can be felt, as there is some twist and vibration through the body. This is particularly apparent around the large windscreen, where the scuttle shake over uneven surfaces really shows up. The ride itself is also fidgety at low seed, and although the CZC feels sportily agile, there's a fair amount of body roll through corners. A choice of engines supply decent power even in base 1.5-litre guise - but the rorty 1.5-litre turbo version is a proper 'warm CC', with the most power of any rival and pleasing surge to make fast motoring relatively straightforward. The gearchange is also quick and slick.

Marketplace Designed and developed with Italian styling house Pininfarina, the new car unfortunately isn't that pretty with the top up. Steeply-raked A-pillars seem out of place, as the high roof of the standard car has been replaced by a lower folding roof; viewed in profile, you see an ungainly jigsaw of shapes. On the top is down, however, the lines improve and the undisturbed, pillarless look is neat. Just the two models are offered - not-turbo and turbo - with simple, clear pricing and few options. Rivals come from various sources as the small CC sector grows. Peugeot started it all off with the 206 CC but it's now joined by the Micra CC, Vauxhall Tigra and, though it's not a CC, the Citroen C3 Pluriel.

Owning The Mitsubishi doesn't feel as well built as, say, a Vauxhall Tigra, and panel gaps could be tighter. The roof mechanism is simple though; release two catches and let the electrics do their work. However, folding the top means you lose out on boot capacity. With a 171-litre capacity, the CZC is tight for space. Oh, and while the Colt does have rear seats, they are so tight they are only any use as an additional luggage area. And while the dimpled finish to the top of the dash, translucent plastics and textured rotary dials give a modern look, it doesn't quite feel special enough and material quality could be better. 12,500-mile service intervals are short too, and costs very high compared to the competition, while the 1.5-litre engine isn't as economical as rivals. But retained values are OK and insurance ratings not too excessive.