Here just in time for the summer, will Mitsubishi's drop-top Colt CZC bring a breath of fresh air? 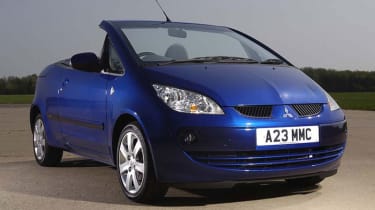 The entry-level CZC offers great value for money when compared to its rivals, but it lacks the added spark of the sportier Turbo version. Its 1.5-litre engine needs to be worked hard to make quick progress, and there's none of the subtle visual tweaks that mark out the flagship. Standard equipment is generous, though, and overall the Mitsubishi makes for a welcome addition to the class.

You've got to hand it to Mitsubishi. The firm has clearly picked its moment to lift the lid on its Colt CZC! The newcomer's folding metal roof retracts in 22 seconds, so not only is the four-seater capable of making a quick change, it promises to be the perfect car to take in the first rays of summer sun.

We've already been impressed with the turbocharged CZC (issue 903), but how does this more affordable, normally aspirated version fare in the UK? We took to the road to find out.

From the front, the CZC's supermini roots are clear to see, with barely any visual differences to set it apart from its fixed-roof cousins. But divert your gaze beyond the windscreen, and it's all change. Pininfarina had a hand in styling the drop-top model, but even the legendary Italian design house has struggled to make the roof-up Colt look anything other than ungainly. This is especially true from the back, where the angular rear screen is in contrast to the curvy bodywork up front.

Dark colours such as the sombre metallic blue of our test car don't suit the cab-forward shape, either, and without the flagship model's bigger, more attractive alloys and sportier grille, the entry-level version appears plain.

Those awkward roof-up looks are all the excuse you need to drop the hood at every opportunity - and thanks to a simple mechanism, that's an easy job. Release a pair of latches above the windscreen, press the door-mounted button and the two-piece design folds neatly away - transforming the looks of the CZC in the process. The interior will be familiar to existing Colt owners and doesn't lack style, but the cabin is dominated by hard plastics.

You do get a pair of rear seats - a feature absent on some of Mitsubishi's rivals - although they are really only good for shopping bags. Write them off entirely, and you can take advantage of the neat wind deflector, which cuts draughts at higher speeds.

On the road, the 107bhp 1.5-litre engine lacks fizz, because of the additional 130kg the drop-top carries over the hatchback. The 0-62mph sprint is completed in 10.5 seconds, but without the Turbo model's sporty exhaust, the entry-level machine sounds uninspiring. Sharp steering, a swift gearchange and decent brakes help to make the CZC an easy car to drive, but the low-speed ride is fidgety, and despite the extra strengthening, scuttle shake is noticeable over uneven surfaces. There is also plenty of body roll if you attack bends with enthusiasm, although pin-sharp handling won't be a priority for the majority of buyers.

Generous kit is the order of the day in the convertible supermini class, and with air-con, an MP3-compatible CD player and alloy wheels all standard, the CZC scores well. Also included are four airbags, deadlocks and remote central locking, but there are no lockable cubbies inside, which is a strange omission for a drop-top offering.

The Colt is a solid first rung on the folding metal hard-top ladder for Mitsubishi, but go for bright colours to make the most of its roof-down charms.