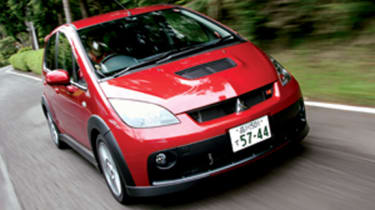 Giving the supermini Colt the Evo treatment had always promised to deliver knockout results, and the Ralliart Version R shows that we won’t be disappointed. Although it’s not as extreme as the four-wheel-drive version which was rumoured to be in development in 2004, the Version R is quick enough to keep up with the latest generation of hot hatches that put performance at the very top of their agenda.

Ever wondered what might happen if you cross one of the world’s wildest saloon cars with a supermini? Mitsubishi did, and the result is the Colt Ralliart Version R.

Inspired by the legendary Lancer Evo family, it’s the closest thing yet to an Evolution-badged Colt, and it is launched this week in Japan. Though not as extreme as a replacement World Rally Colt which was rumoured to be in development back in 2004, the Version R does promise a turbocharged engine, along with uprated handling and a bespoke interior.

The newcomer, which is based on the Colt CZT, is being tipped to come to Britain next year should demand prove strong enough. Prices are still under discussion, but the premium machine is expected to cost £14,500. To find out what buyers can look forward to, Auto Express got behind the wheel for an exclusive first drive.

However, before you even start the engine, you can’t help but be bowled over by the design. Mitsubishi, along with its motorsport arm Ralliart, has created a car that includes all the most important Evo styling cues.

Looking ready for business with flared wheelarches, an Evo-style front bonnet and 16-inch alloys, the Version R is as extreme as hatches get.

Inside, the sporty upgrades continue with a 240kph speedometer, colour inserts on the centre console, aluminium pedals and figure-hugging Recaro seats that could have come straight out of the Evo. And once you get past the cosmetic surgery, you soon realise that the engine, gearbox, brakes, suspension and steering have all come in for attention, too, promising a driving experience to match the Mitsubishi’s wild looks.

Most of the parts can be traced to the standard CZT, but nearly all the key components have been modified. To make it more rigid, the chassis was reinforced by doubling the number of spot welds. Strut tower bars on the A-pillars and rear corner braces enhance stiffness. The suspension joints are uprated, and special shocks im-prove stability without ruining the ride.

The result is a hatch that corners flatter and faster than a CZT, but which maintains a welcome degree of comfort. The upgrades, plus grippier 16-inch Yokohama Advan Neova tyres, translate into more responsive steering than the CZT delivers. There’s also less understeer at the limit, while the front-wheel drive and traction control keep the Colt going in the right direction.

With its engine mated to the CZT’s five-speed box, the Version R’s power curve matches the ratios perfectly. The 0-60mph sprint takes little more than seven seconds, and the car feels extremely quick. Its brakes inspire confidence, too, drawing the Colt to a halt quickly and without any fuss.

Whether or not the feisty model hits the UK is all down to you. While Mitsubishi's European division has opted not to import it, the Japanese firm's British arm could still bring the hot Colt to our shores independently, as it does with the Evo. After our test drive, we think it should... and quickly!